Yes, it’s Veterans’ Day. I took a walk this morning with friends on the Lakewalk along Lake Superior in Duluth, where I live. We stopped at the Korean and Viet Nam war memorials in recognition that this is Veterans Day. The photo above is of the Viet Nam memorial. On that wall is the name of a good friend whose plane was shot down over Laos. He was never found or heard from again. Ten years after his plane went down, he was declared legally dead. His wife, a good friend of mine, was able to move on and marry another man with whom she has been very happy. They have several grown children now.

I passed a Veterans Day parade in my city on my way from one place to another. There were a lot of veterans, mostly older, marching on a cloudy, humid day in my city. It was sad, in a way. And we always remember our veterans.

Will we remember that 22 veterans a day take their own lives- mostly with guns and bullets? What a sad state of affairs. Access to guns by people who are having these kinds of problems is just a bad idea. From the article:

One of the most tragic problems afflicting those who served their country is the specter of suicide, often the fallout of post-traumatic stress disorder (PTSD). After more than a year of intense lobbying by veterans groups, Congress this year passed the Clay Hunt Suicide Prevention for American Veterans Act, named for a Marine veteran who took his own life even after working as an advocate for suicide prevention. The law is designed to reduce military and veteran suicides, and improve access to quality mental health care.

But veterans experts estimate that 17 of the 22 daily suicides involve vets not enrolled in the VA’s health care system, suggesting more research — and far greater funding — will be necessary to get a handle on the problem. (…)

Faddis and his fiancee were scheduled to be married in Fremont in a month when he shot himself in their Newark apartment. The gun had not been aimed directly at his temple, giving his mother some small hope that her only son didn’t actually intend to kill himself. But Faddis was an NRA safety instructor, one of many jobs he had dabbled in since leaving the Navy.

“He taught people you don’t point your gun at anything you’re not going to shoot,” says his father, Stan Faddis, who was a Santa Clara County probation officer for 27 years. He moved the family to Turlock after retiring in 2011, and Daniel — who was still struggling to find himself after the Navy forced him out in 2006 for being overweight — lived with his parents while shuffling through jobs as an armored car driver, a bounty hunter, and finally, security guard at a department store in the Stanford Shopping Center.

When people are in distress or having mental health problems or financial problems, gun safety and gun training mean nothing.

We throw the word hero or heroine around a lot when it comes to veterans. They did a job many didn’t choose or want to do. Without the draft, the military is an optional thing for our young men and women. They do it for different reasons. But I am guessing that many did not expect the stress and trauma they experienced while serving.

My own brother, a Viet Nam veteran, suffers from depression, PTSD, and now Parkinson’s Disease and other physical and health challenges. I can safely say that his life is a mess, no thanks to his service in the military. My Dad served in North Africa and Italy in World War ll. Much later in his life, when my brother and I were young, we could hear my Dad having panic attacks in the middle of the night. Nothing was ever said about it. After both of my parents died I found some books from my Dad’s army experience and realized how awful his tour of duty was. That generation did not talk about all of the bad stuff. They held it inside. Watching Ken Burns’ TV series about World War ll opened my eyes to the dangers and the terrible trauma my Dad must have experienced while serving his country.

After visiting the American memorial at Normandy on a trip to France, I realized that our 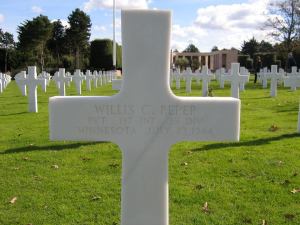 young men were sitting ducks while trying to land on the beaches to help the allies finish the war. For some reason, it felt important to me to walk on the sand at the beaches at Normandy and breathe in the scene of confusion and death our soldiers faced. The French people are still grateful for the American and Canadian troops who freed their country from Nazi Germany. The memorial is a very emotional place for all who visit. Rows of crosses and the beautiful grounds, sculptures and museums are poignant, peaceful and informative. One can almost envision the battle scenes and feel the death cries of our soldiers. The photo here is my own taken when we laid a flower at the grave of several Minnesota military members.

Since World War ll, several more wars have been fought, taking the lives of many. Many who don’t die come home with physical, mental and emotional injuries. It seems we are more than willing to support our military when they are sent into harm’s way but not so much once they return. We have no common sense when it comes to dealing with military suicides and what can be done to prevent them. Our returning military members need to hear that having a gun around could be a risk to themselves or those around them. But leave it to the gun lobby bought and paid for Congress members to make sure we don’t counsel our veterans about the risks of guns. It’s inexcusable and shameful given the epidemic of suicides amongst veterans.

Today I also remember that more Americans have died from gunshot injuries since 1968 than all Americans in wars fought since the Revolutionary War. Where are the parades and the day of memorial for them? There are many heroes among the victims and the survivors of gunshot injuries. And also amongst those who work hard to prevent the awful devastation of gun violence in our American communities.

It doesn’t have to be this way. We could do something to save lives if the gun lobby would get out of the way and let it happen. Until they do, we can expect more of the same.

This close-up photo of the Korean memorial in Duluth tells the story that 80% of “B” company were killed or wounded in that war. It’s hard to fathom this much loss just as it is hard to fathom that 89 Americans die a day from gunshot injuries.

In memory of my Dad. In honor of my brother. Remembering veterans on this day and hoping that common sense will break out.