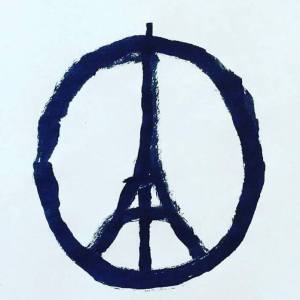 The past hours have been filled with the news of what has now been determined to be a terrorist attack in Paris. It is estimated that 127 people are now dead, so far anyway. Some of those injured are reported to have very serious injuries so the death toll could rise. There are really no words for this incident. The world is watching yet another attack on innocent people perpetrated by those with hate and anger in their hearts. We are all asking- why?

Predictably there are Americans who actually believe that if only French residents were allowed to carry guns in public, lives could have been saved. These delusional people have an alternate view of the world not shared by most. If someone can explain how a gun could have been used to take out guys wearing suicide vests when there is no expectation that someone will blow themselves up in seconds, then go ahead. Enlighten us. If someone can explain how a pistol in a waistband holster would save innocent citizens from men armed with AK 47s, (maybe automatic type weapons) then go ahead- enlighten us.

Tragedies like the ones that unfold every day in America and international terror attacks will not be stopped by armed citizens. I saw some tweets today from American gun extremists and a few politicians stupidly opining that if only the French had our American conceal carry laws, this attack could have been thwarted. This tweet by a Wisconsin Sheriff suggests that the Paris terror attack could be an opportunity for the Republicans to win the White House. Sheriff Clarke has made other incendiary remarks regarding gun violence. He also has strong conservative views about gun rights and is a Constitutional Sheriff. Other gun nuts are claiming that they would now carry AR 15s in their cars along with the ammunition needed to thwart a terrorist attack.

Just as the false claim that armed people could have saved themselves in the January Charlie Hebdo attack was debunked by a Texas gun group who set up a mock attack, the same is true in this attack and other terror attacks. From the article:

Killed or not, some of the volunteers still seem to believe arming themselves is the right thing to do.

“Still got killed, but I did better than I thought I would do,” said Parks Matthew, one volunteer who played the role of an armed civilian to KTVT. “If I was in a movie theater and someone were to pull a gun, what am I going to do? And I know now I’m not just going to fall on my kids and protect them. I need to advance on the threat,” Matthew said.

“It’s interesting to see how people react under stress,” said Nick Leghorn, part of the group that staged the reenactment. “It’s not what you’d expect people do.”

This bears repeating from the above article: “It’s not what you’d expect people do.” That is the problem with the false logic of the corporate gun lobby and gun rights extremists. They live in a world where they are the “good guys” with guns who can inevitably take down the “bad guys” with guns. They are wrong and they even proved it to themselves in their mock scene of the Charlie Hebdo attacks. But even after that, they can’t admit that they are wrong.

Lax American gun laws, promoted by the corporate gun lobby and their bought and paid for politicians, are not working to keep us safer on our own soil- 89 Americans a day die from gunshot injuries and about 32 of these are homicides.

I found this article which highlights the problem of loose guns left over from wars on the Continent becoming the weapons of choice for terrorists. Weapons of former wars become weapons of current terror attacks. But weapons of war are not available to ordinary citizens in most of Europe. Other countries don’t need our gun culture. We need theirs.

It only takes a few people armed with guns and explosives to terrorize a city or a geographic area. Let’s look at the “DC snipers” and how they held the citizens of several communities in 3 states hostage for several days in 2002 with their military style weapons, readily available in the US to just anyone. And then let’s take a look at the 2008 terror attacks in Mumbai and how easy it was for terrorists armed with military style AK 47s to hold a city hostage for days. The 2013 attack at the Westgate shopping Mall in Kenya  is another example of how a group of armed terrorists- domestic or otherwise, can use weapons to terrorize a large shopping mall for days. And we shouldn’t forget the 2011 attacks by an armed extremist in Norway that shocked that country and the world with the inexplicable death toll of 77.

And I’m sure I don’t need to get into our own country’s mass shootings that are carried out by our own armed domestic terrorists.  Columbine, Virginia Tech, Aurora, Charleston, Sandy Hook, Naval Yard, Fort Hood, and numerous others have also rocked our own country and the world.

Common sense tells us that ordinary armed citizens cannot defend themselves against attacks like these or the regular mass shootings, domestic shootings and daily homicides taking place in our own country. But gun extremists are suffering under the delusion that guns are the answer. Remember the attack on a French train this past summer? Remember that it was ended by brave unarmed Americans?

We are all sad and feeling helpless this morning in the wake of the “City of Light” suffering the darkness of the worst toll of human life in France since World War ll. But then let us also remember that in 2 days time, more than 127 Americans die from gunshot injuries. Since World War ll, hundreds of thousands of Americans have lost their lives to bullets. And we do nothing.

Now we are outraged and fearful. Some of us will, inexplicably, promote more guns. Most of us want fewer guns everywhere and want to find ways to stop the carnage.

There are obvious political and foreign policy debates occurring after this attack which I am not going to get into on this blog. Those need to be discussed by people with a higher pay grade than my own.

But there are other considerations as well for American and world travelers. With terror attacks occurring in tourist destinations all over the world, what will we do about travel plans? That is also on my mind as someone who has done a lot of travel to places like Paris, Spain, Turkey, Greece, Norway, Croatia, etc. where terror attacks have occurred.

Travel writer Rick Steves has made this statement on his Facebook page:

I’m sure that many Americans will cancel their trips to Paris (a city of 2 million people) or the rest of Europe (a continent of 500 million people), because of an event that killed about 150. As a result, ironically, they’ll be staying home in a country of 320 million people that loses over 30,000 people a year (close to 100 people a day) to gun violence.

Again, our thoughts and prayers go out to the people of Paris, the victims, and their loved ones. And it remains my firmly held belief that the best way for Americans to fight terrorism is to keep on traveling.

And what will we do about the carnage of mass shootings and terror attacks all over the world? It will take all hands on deck to deal with the modern world’s terrorists no matter where they attack. The world is full of angry men with guns. They are shooting innocent people in movie theaters, churches, schools, military bases, on our streets, in tourist destinations, in cafes and music venues, shopping malls and other public places all over the world. We can’t stop living our lives out of the fear that comes with these attacks. But we can demand that our leaders keep us safe from the carnage.

Vigilance, better and stronger policies, thoughtful and serious discussion, responsible solutions and whatever else it takes is what is needed now. We are outraged by the continued death and destruction caused by armed people all over the world every day. #Enough.