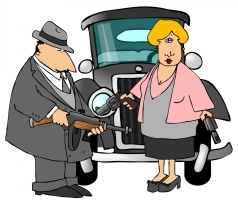 Remember Bonnie and Clyde? I do. There were a lot of drive-by shootings and road rage shootings committed by the infamous couple who died in their car of multiple bullet wounds at the hands of law enforcement. Those were the “good old days” when bullets were flying and machine guns were easily available to those who shouldn’t have had them. Revenge, gangs, anger, too much alcohol and guns- bad combinations.

Bonnie and Clyde were killed in 1934.

Remember Elliott Ness and Al Capone and the mafia era? The years of prohibition created mayhem on the streets of some of our cities. It was just after this time period that Congress decided that machine guns and silencers should not be available to average citizens without very strict regulations. In 1934, the National Firearms Act was passed:

With the passage of the NFA, these guns immediately faced severe restrictions.  While owning them is still technically legal, they must be registered (which isn’t exactly easy) and they are taxed more heavily ($200 for owning a silencer, for example, or as low as $5 for some smooth bore pistols, like the Serbu Super Shorty pictured earlier).  Anyone wanting to own one or manufacture one has to go through the BATFE for approval. (…) But firearms enthusiasts should look at it from a cautionary perspective, as well.  This was possible.  In fact, it is one of several legislative acts that govern the way we think about firearms.  And the NFA will be the cornerstone on which new restrictions will be built.

Few, if any, crimes are committed with these weapons because so few people own them and those who do go through a long and expensive process to get them. But it could only be a matter of time as the corporate gun lobby is driving by to get laws passed in many of our states to allow people to purchase silencers. When more people own silencers, will they, too, end up in the illegal market? How will they be used? Keep track of this as the push is on to get them into more hands. My own state of Minnesota passed such a law a few years ago:

Anderson, who sometimes carries a weapon to the Capitol, says that he intends to buy silencers for some of his guns. He outlined the process he’ll have to go through: He’ll have to get approval from the Cass County sheriff; pass a state background check; apply to the federal government to possess the silencer, sending $200 along with his application (which needs to include the serial number of the silencer he intends to purchase); go through a federal background check that might take months; and finally, make the purchase of an item that is fairly pricey (upwards of $700).

“It’s ludicrous that we have to go through all of this at the federal level,” Anderson said. “This is an item you should be able to walk into a store and just purchase. We need to work on the federal law. But still, this is a pretty big step.”

Yup. It’s just a matter of time before silencers are available with no background checks from private sellers and on-line just like guns are in most states. That is why we need to stop the drive-by policies of the corporate gun lobby and put the brakes on these bills. What we need is to make sure ALL gun sales, including ammunition and paraphernalia go through Brady background checks.

Why the resistance to this? It’s a minority who oppose it. Their reasons make no sense and aren’t even true. Time to make sure we do the right thing and stop people from getting shot in their cars, in their homes, and anywhere else.

Today, we have more guns than any other democratized country in the world. Over 300 million. We also have the highest number of gun deaths per capita and the weakest gun laws. Other countries don’t have a second amendment or a corporate gun lobby like ours. Sure there are some people in other countries who want to loosen the laws that have been passed. But it isn’t happening because other countries are watching our mass shootings and every day carnage and understand that our loose laws contribute.

The NRA and others in the corporate gun lobby have flown or driven into almost every state of the union and left us with the worst gun policies in the world.  This was done very purposely to drive up profits for the industry and deceive the public into believing that the second amendment includes allowing anyone to buy a gun and carry it everywhere. That is NOT what the founding fathers had in mind when the amendment was written. And, of course, we need to remember why the founding fathers wrote that amendment into our Constitution in the first place. From this Mother Jones article with an interview with author Michael Waldman of the Brennan Center:

MW: Yes. And that might be noteworthy for some. There were plenty of guns. There was the right to defend yourself, which was part of English common law handed down from England. But there were also gun restrictions at the same time. There were many. There were limits, for example, on where you could store gunpowder. You couldn’t have a loaded gun in your house in Boston. There were lots of limits on who could own guns for all different kinds of reasons. There was anexpectation that you should be able to own a gun. But they didn’t think they were writing that expectation into the Constitution with the Second Amendment.

MJ: So then why focus on the Second Amendment and not the English Bill of Rights or other things the framers drew on that more clearly address individual gun ownership?

MW: We are not governed today, in 2014, by British common law. Law evolved, the country evolved. It was a very rural place. There were no cities. There were no police forces. It was a completely different way of living. So gun rights activists turned this into a constitutional crusade. Those who want more guns and fewer restrictions realized they could gain some higher ground if they claimed the Constitution.

I happen to believe that the Constitution is a living document that can change when change is required to keep Americans safe and healthy.

Ever since the 1977 Cincinnati NRA convention revolt (see article above), the gun lobby has changed -transformed itself into a lobby group that doesn’t represent its’ original purpose nor its’ members. They changed to a group that protects and supports the gun industry profits and vice versa. As a result, the landscape changed as well regarding gun policy.

One of the goals of this change  was passing laws in almost all states to allow people to carry guns in their cars and public places. The charade was that people needed guns for self defense everywhere they went. Our legislators bought it because-  rights. Never mind that the second amendment does not mention the right to carry guns for personal protection. These laws had the effect of changing the culture around guns. It became OK for people to have guns with or without a permit on their person.

Former Representative Gabby Giffords spoke at the Democratic National Convention. Her appearance caused a stir in the hall as well it should have. Her speech was simple and short because of her brain injury. Do you remember that her shooter had a gun with no permitting process as is allowed by Arizona law? I do.

It wasn’t so many years ago that it would have been unusual for guns to be found in cars and used in drive-bys or accidental shootings. Two recent examples in my own state:

Man follows couple on local road and shoots and injures one passenger:

Where did this felon get his gun? It’s easy in our country for that to happen.

Man shot and killed in bar by someone  who allegedly fired shots car at the bar. “The man, yet to be charged, is jailed on suspicion of assault and second-degree murder during a drive-by shooting, suggesting that he fired the shots from a vehicle.”

Many examples of road rage involving gun violence exist as well with some dead victims.

Common sense suggests that having guns in cars is not a good idea. Small children find them in the glove box or the back seat and shoot them. I have written about more than a few of these recently- a small child shot and injured his own mother, a gun loving person. Another toddler killed his own mom with a gun found in the car.

And then there are the people who get caught for illegal drugs and guns like this case in Daytona, Florida:

And police are looking for two others who are targets of the operation: Tiffany Malcom, 33, and Robert Smith, 27. Smith, Chitwood revealed Wednesday, is a person of interest in the murder of Deandre Smith, who was shot to death as he drove his car on the Oakridge Boulevard Bridge on May 10, 2015.

What is it about criminals shooting each other in cars? Don’t they know that stray bullets hit innocent people?  A beloved grandmother was shot and killed by a stray bullet in Minneapolis in May while sitting in her car minding her own business. They don’t care really when they have anger and vengeance on their minds. Bullets don’t know where to stop and there are way too many of them flying from and into cars all over America. And the gun lobby doesn’t seem to care that people like the 29 arrested in Daytona found guns so easily to traffic drugs and kill other people.

Drive-by gun policy comes from the corporate gun lobby who send NRA or other representatives into states to lobby and write bill language. And then they leave us with bad policies that have led to more gun deaths and injuries. Lives are too precious to leave gun policy to those whose interest is in selling their product. Finding new markets for new guns leaves us with too many grieving families and devastated communities.

It takes a while for new policies to change the landscape and become effective. So about 11-12 years after many states passed conceal ( or open) and carry laws, we see how they are working. Most gun permit holders are safe with their guns and do not misuse them. But enough of them have been dangerous- either intentionally or accidentally that an argument could be made that we need to strengthen these laws.

Rather than people needing to use guns for self defense, those guns are being used in shootings- drive-bys or other shootings. Few instances of defensive gun uses make the case for conceal and carry weak.

We are just plain not safer with more guns on our streets, in our cars and in our homes, schools, places of work and where we play. Using guns for hunting and sport shooting is one thing. Having them around in places where we gather or drive our cars makes no common sense. But because the NRA and corporate gun lobby drives by our states and promotes weakening our gun laws, the result has been the devastation in communities all over our country.

Last night I watched Hillary Clinton accept the nomination of the Democratic party to be the first woman to have that honor. It was thrilling to know that I have lived in a time when a woman can be nominated for and hopefully win the Presidency. Among other things she said in her acceptance speech was this ( meme by Brady Campaign):

Thank you Hillary. We are just trying to keep people from getting shot by people who shouldn’t have guns. Let’s get to work to make the changes we all deserve.