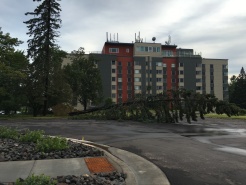 We were without power for 3 days following a terrible and violent summer storm in my city of Duluth. We were awakened at 3:30 a.m. on Thursday morning by hurricane force winds, violent thunder and constant and bright lightning. To say it was scary is an understatement. We heard trees cracking along with all of the other noises and were not sure if we would have to seek shelter. The photo here showing one tree down on a wire is minor compared to the destruction that happened all over in my part of town.

A majority of Duluth residents lost their power during the storm due to trees on wires and twisted power poles. Upon waking on Thursday morning, I checked on my friends to make sure all was well. Many had huge Spruce and other old growth trees down in their yards. A friend and I drove around a bit looking for coffee and were stunned at the awful damage done by this storm. Many streets were impassable because of downed trees and wires and debris was all over. Traffic lights were not working causing long lines of cars on the streets.

The city is recovering though many are still without power as I write. Neighbors are helping neighbors and the city has risen to the occasion. We are not used to these kinds of storms in our area. We have blizzards that cause power outages and sometimes downed wires. But this is something most of us have not seen in our lifetimes. The weather has been generally more tumultuous this summer. With many torrential rain falls and severe storms, I am convinced that climate change is real.

Also what is real is the summer of shootings of young black men and police officers. In Minneapolis, shootings have risen to one of the highest levels of recent years. This Star Tribune article revealed a different law enforcement policy to stop some of the straw purchasing that accounts for many crime guns getting into the wrong hands. From the article:

Amid signs of a rise in illegal firearms trafficking, federal prosecutors in Minnesota have hit on a novel strategy to crack down on gun violence and get shooters off the streets. Instead of prosecuting suspects for murder, where convictions can be difficult to obtain, they charge multiple defendants with conspiracy to buy and possess guns illegally.

The strategy is rooted in the successful prosecution of 11 gang members in 2014, after what authorities called an “all-out shooting gang war” in the Twin Cities. Prosecutors built a conspiracy case that produced 10 guilty pleas and a jury trial conviction of the gang’s leader, Veltrez Black, who was sentenced this spring to 15 years in prison.

Now a Minnesota prosecutor has been asked to share the strategy with Chicago authorities, who are grappling with near nightly volleys of gunfire throughout their city.

Such crimes often go unsolved because witnesses refuse to break a code of silence, prosecutors say, but firearms conspiracy cases can be easier to build.

What we know is that crime guns don’t fall from the sky. Guns start out as legal purchases and get into the hands of those who shouldn’t have them in various ways. It’s easy for anyone to buy guns legally or not, by not undergoing a background check at gun shows, flea markets or on-line sites such as Armslist or Facebook.

Straw purchasing is another way that allows the flow of guns into our streets and neighborhoods. We can do something about this if we have the will and think together about how to stop the guns that get used in shootings. Too many people are dying. There should be no excuses for not doing whatever it takes. More from the article:

The strategy is timely, given the recent surge in local gun violence. Minnesota gun deaths hit a 10-year high in 2015, according to the Minnesota Bureau of Criminal Apprehension, and represented a greater share of all homicides (61 percent) than in 1995, when Minneapolis was dubbed “Murderapolis.” (…)

And a new federal report shows that the U.S. Bureau of Alcohol, Tobacco, Firearms and Explosives (ATF) recovered and traced 2,780 firearms in Minnesota last year — up 14 percent from a year before and also a 10-year high. That total doesn’t include all guns recovered by other law enforcement agencies; Minneapolis police inventoried an average of 681 guns as evidence per year from 2013 to 2015.

In the article there was mention of the problem of stolen guns. Some states have passed lost and stolen gun legislation to require people to report a stolen gun(s). We can see why from this: “The office also charged two people with buying up to 10 weapons for others in the group and later reporting the guns as stolen.”

And this, from the article, shows that many gun dealers are doing their jobs well:

At Bill’s Gun Shop & Range, owner John Monson is among the numerous Twin Cities sellers to occasionally find that a straw buyer passed through their doors. Monson said each of his five locations logs suspicious activity from any of the 100,000 customers who visit each year and passes along information to law enforcement agencies when necessary. Investigations can also evolve from mandatory reports to local police and the ATF whenever a customer buys two or more handguns in a week.

“We can’t stop all [straw purchasing],” Monson said. “But we can stop it in conversations in the process that happens before they do buy the gun.”

Prevention is what this is all about. If we can prevent guns from getting into the hands of those who intend harm, we can prevent some of the way too many shootings. Working with gun dealers is an important part of this process.

A new approach to preventing the proliferation of weapons onto our streets is needed given that many of our elected leaders are so beholden to the corporate gun lobby causing inaction in passing new laws or strengthening the ones we have. But we are seeing a new boldness amongst our politicians who are willing to speak out against the gun lobby publicly. One such statement was made by Democratic Vice Presidential candidate Tim Kaine on Saturday at his introductory speech. He spoke out and has spoken out before on the need for passing reasonable gun laws and has won all of his elections anyway.

The gun lobby is going to experience a stormy time now that their hypocrisy and rhetoric of fear are coming back to haunt them. Talk has turned to the nonsensical idea that citizens should openly carry assault rifles at public events and rallies such as the Dallas Black Lives Matter rally that turned violent. Others are wondering about conceal carry policies and how they work to protect people given that Philando Castile was armed with a legal gun when he was shot. There is some confusion over this confirmed by a local police officer at a meeting I attended about community safety. There are some interesting comments in the above linked article:

How the Philando Castile situation will affect his work: “Will we change the way we do the training? No, because we believe we’re teaching it correctly. Will we emphasize this part of the training more? Yes. Will it come up for discussion? Guaranteed.”

It is undeniable that risk is involved when someone chooses to own and carry a gun. Guns are lethal weapons designed to kill others.

There is a perfect storm coming. More and more people are getting involved. This latest action to get in the way of Crossfit Reebok giving away Glock pistols to the winner of the  annual Crossfit games worked to call attention to the idea that gun giveaways are just not a good idea and obviously promote gun company profits. After the Orlando shooting, the GLBTQ community is not going to sit back and be silent. From the article:

“It is an outrage that an organization like CrossFit Reebok, who purport to be about health and fitness, are giving away a weapon of death and destruction as a prize,” said New Yorkers Against Gun Violence Executive Director Leah Gunn Barrett.

Why give guns away? Promotion of weapons of death just does not fit with exercising.

From the above article:

Nearly two-thirds of respondents expressed support for stricter laws, with majorities favoring nationwide bans on the sale of semi-automatic assault weapons such as the AR-15 and on the sale of high-capacity magazines holding 10 or more bullets.

The percentage of Americans who want such laws is the highest since the AP-GfK poll started asking the question in 2013, a survey taken about 10 months after the Sandy Hook Elementary School shooting in Newtown, Connecticut, that killed 20 children and six educators.

High-profile shootings also appear to have taken a toll on Americans’ sense of safety. Strong majorities of those polled expressed some degree of concern that they or a relative will be a victim of gun violence or a mass shooting.

What I love about this poll is that it reveals that public opinion has not changed regarding support for doing something about the proliferation of guns in America. And when politicians and the public are in no mood for the increase in mass and every day shootings, things are going to change. The gun lobby may experience some stormy times and it would be past time for that to happen.

As my friend and writer, Sam Cook, wrote for the Duluth News Tribune, there is a hole in the sky left by the fallen trees.

But guns are not falling through that hole.

The public has shown over and over again over many years that they want our leaders to act to prevent at least some of the heinous shootings. More guns are clearly not making us safer.

I leave you with the latest mass shooting at another nightclub in Florida where teens were gathered for a pool party.  Two killed and 17 injured.

Teens should be able to attend a pool party without being shot and killed.  Guns make every situation more likely to end badly. They make for the perfect storm.

#Enough. We are better than this.