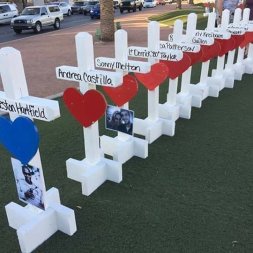 Today we remember the 58 innocent Americans whose lives were lost senselessly in the devastating shooting at a concert in Las Vegas. One year ago today, the carnage once again captured the nation’s attention and left us horrified as the news filtered out.

Who could imagine that one man standing high above the crowd in a hotel room with a high powered rifle fitted with a bump stock could do so much damage? It’s an American tragedy and it happens with such frequency that we grow numb.

Before the Las Vegas shooting became the deadliest mass shooting in U.S. history, the Pulse Nightclub shooting ended with 49 dead. Soon to follow would the Sutherland, Texas church shooting and then the Parkland, Florida school shooting.

Between them, 151 innocent Americans were left dead.

How many more will it take before we do something about the daily carnage?

Of course, about 38,000 Americans, give or take, have lost their lives to bullets since the Las Vegas shooting. It should frighten and concern us that the number of the dead bodies is increasing in recent years.

Our collective common sense tells us that we can be better than this. The fact that we aren’t even trying is a travesty.

Elections are coming up soon enough. The issue of gun violence has become a major issue of concern in elections after the Parkland students made us all sit up and notice. Their efforts to register voters and get out the vote have been impressive to say the least. Students are registering students in large numbers at high schools and campuses all over America:

But youth voter registration has surged since the Parkland shooting, according to an analysis by the consulting group TargetSmart. Among 39 states where data is available, voter registration by 18-29-year-olds went up an average 2.2 percent, the group found. In Pennsylvania, which has a race for governor and House and Senate races that could determine which party controls each chamber next year, youth registration rose 16.1 percent. In Florida, the hike was eight percent; in Colorado, 2.3 percent, and in Ohio, the rise was six percent.

“I absolutely think 2018 is going to be different,” both in terms of young voter participation and the impact of the gun issue, says Isabelle James, political director for Giffords, a gun-safety group founded by the former congresswoman. “Young people are engaged at an unprecedented level, and it started before Parkland,” she says.

Protect Minnesota is now involved with voter registration all over the state. National gun violence prevention groups, like the Brady Campaign, are also registering voters. It is encouraging to see the young people so involved and making gun violence an issue in this year’s election.

Yesterday, the Duluth News Tribune ran an opinion piece that I wrote with the co-president of our local Brady Campaign chapter also working with Protect Minnesota.

Here is what we said:

Skip to main content
Local View: Elect leaders who will change the culture of gun violence

By Joan Peterson and Mary Streufert

A year ago tomorrow, on Oct. 1, 2017, a man in a hotel room in Las Vegas, high above a gathering of concertgoers, unleashed 1,100 rounds of bullets at anyone in his high-powered rifle’s sights. Using a bump stock to make his rifle more deadly, he killed 58 people and injured 851 in a matter of minutes. Concert attendees scrambled to safety or hid under bodies to avoid the bullets. The injured still suffer from physical and psychological wounds, and the trauma ripples through friends and families.

This tragedy was added to a pile that already included the Pulse nightclub and numerous shootings in schools, churches, theaters, and places of work. After a while one becomes weary.

We all have heard arguments over why these happen and what should be done about them. There is no doubt it’s a very complex, multilayered public health issue that needs to be addressed from many angles.

However, there is one common denominator: the gun. If any of these shooters had been thwarted from getting a deadly weapon, maybe some of their victims would be alive today.

Keeping guns out of the hands of people intent on doing harm is a daunting task. There are some safeguards in place, but they have loopholes. Any attempts to close those loopholes or pass new laws that might keep guns away from those who cannot handle them responsibly have proven to be almost impossible. Our elected officials have stonewalled changes, in spite of a majority of the public, including gun owners, wanting more safeguards. Through financial support, the powerful gun lobby has maintained a tight grip on our elected leaders.

It is understandable, when faced with the complexity of the gun-violence epidemic, to do nothing. But we ignore this issue at our own peril.

There are small steps we can take that would, in time, make a difference. Some common-sense measures include requiring background checks on all sales, requiring waiting periods for gun purchases, and enacting extreme-risk protection orders so guns can be temporarily taken from people who could be dangerous to themselves or others.

In addition, the bump stock feature, the unregulated add-on device that allowed the Las Vegas shooter to unleash numerous bullets in seconds, needs to be banned. At the very least it should be tightly regulated.

As we remember the victims of the Las Vegas shooting, let us also remember that it doesn’t have to be this way. It is up to us to elect leaders who will be the voices calling for laws to protect their constituents. With our support they can change the culture of gun violence and the conversation about the role of guns in our everyday lives.

A new generation is stepping up to demand action. The Parkland students led the way in bravery and activism to show adults that change can happen if our voices are loud and clear. Our leaders need to listen to the majority of us who are telling them that we want change and we want action.

We ask our candidates to stop their campaigns for 58 minutes on Monday, Oct. 1 to remember the victims. We ask them to consider that this is not a zero-sum game. The Second Amendment can coexist with the rights of all of us to be safe from gun violence.

In the name of the 58 victims who died tragically one year ago, we invite candidates and elected leaders to work with us, their constituents, to reduce gun violence.

Joan Peterson and Mary Streufert are co-presidents of the Northland Chapter of the Brady Campaign/Protect MN. Both the Duluth women have lost family members to gun violence.

The city of Las Vegas will go dark tonight in memory of the victims and survivors.
For the families of the victims and for the survivors, their lives have been dark since the shooting one year ago. They are suffering from PTSD and other emotional and physical difficulties that just won’t go away:

Fudenberg heard the gunshots through his phone. Popping sounds. He can’t forget them. His protocol has been to show up at any scene if there were two or more dead. The investigator told him there were at least 20. Maybe more.

Cheney saw his friend absorb the news. His face locked in an expression he’d never seen.

“The change in him was instant,” Cheney said. “We had been talking and joking and, suddenly, it was gone.”

Fudenberg was dropped off first by the driver. Cheney didn’t see him again until he was on television, giving updates on the deceased. It would be two more weeks before he would see his friend again in person. Over that dinner, Cheney would see some cracks.

The veteran coroner would cry. It wouldn’t be the last time.

This is the ripple effect of gun violence that we don’t deal with well.
We cannot forget the 9 victims of the shooting at Umpqua Community College in Oregon 3 years ago today. The community held an Umpqua Strong walk/run in memory of the victims.
The bodies just keep piling up.
So on this day, our country has experienced 2 mass shootings.
#Enough