I want to first remember the victims of the Virginia Tech mass shooting which happened on April 16, 2007. It was the worst mass school shooting after Columbine and still remains one of our country’s deadliest mass shootings. 32 died and 17 were injured. The effects of that shooting, even 11 years later, live on for those who were there, those left behind and the entire community. Gun violence has a ripple effect. No one forgets. The corporate gun lobby wants us to forget. They are not succeeding. If anything, we are remembering more and more as more and more of these kind of shootings and every day homicides, suicides and unintentional shootings continue apace.

The young man who got his hands on a gun and shot up the Virginia Tech campus should not have had a gun and was clearly irresponsible with his gun. Not only was he irresponsible, he intentionally murdered innocent people. He was a supposed “legal” gun owner as his name was not in the FBI database flagging him as prohibited to buy a gun. It should have been but our loose gun laws allowed him to purchase that gun and kill people. Why did he want his gun? For self defense? No. To kill people.

Many gun owners are responsible with their guns and own them for hunting or sport. Many gun owners are not interested in shooting at people who they believe might do them harm because they are not paranoid. Most gun owners don’t just shoot first and ask questions later. In fact most Americans don’t do this because most Americans don’t own guns in their homes for hunting, sport or self protection. And they are more safe than those who do as it turns out.

I write all the time on this blog about the rare instances of needing a gun for self protection in your home or in public and the rare incidents of said uses of a gun. NPR posted this article a day ago about this very topic.:

The latest data show that people use guns for self-defense only rarely. According to a Harvard University analysis of figures from the National Crime Victimization Survey, people defended themselves with a gun in nearly 0.9 percent of crimes from 2007 to 2011.

David Hemenway, who led the Harvard research, argues that the risks of owning a gun outweigh the benefits of having one in the rare case where you might need to defend yourself.

“The average person … has basically no chance in their lifetime ever to use a gun in self-defense,” he tellsHere & Now‘s Robin Young. “But … every day, they have a chance to use the gun inappropriately. They have a chance, they get angry. They get scared.”

The gun rights advocates beg to differ with little evidence or actual facts- from the article:

But the research spread by the gun lobby paints a drastically different picture of self-defense gun uses. One of the most commonly cited estimates of defensive gun uses, published in 1995 by criminologists Gary Kleck and Marc Gertz, concluded there are between 2.2 and 2.5 million defensive gun uses annually.

One of the main criticisms of this estimate is that researchers can’t seem to find the people who are shot by civilians defending themselves because they don’t show up in hospital records.

“The Kleck-Gertz survey suggests that the number of DGU respondents who reported shooting their assailant was over 200,000, over twice the number of those killed or treated [for gunshots] in emergency departments,” crime prevention researcher Philip Cook wrote in the book Envisioning Criminology.

Kleck says there is no record of these gunshot victims because most instances of self-defense gun use are not reported.

Hmmmm. Really? Why not report these incidents if it is so important to you? Because they are not happening, that’s why.

“The researchers who look at [Kleck’s study] say this is just bad science,” Hemenway says. “It’s a well-known problem in epidemiology that if something’s a rare event, and you just try to ask how many people have done this, you will get incredible overestimates.” 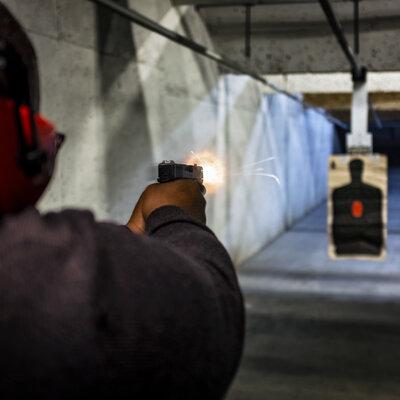 In fact, Cook told The Washington Post that the percentage of people who told Kleck they used a gun in self-defense is similar to the percentage of Americans who said they were abducted by aliens. The Post notes that “a more reasonable estimate” of self-defense gun uses equals about 100,000 annually, according to the NCVS data.

Check out this chart from the Gun Violence Archive for facts:

You can see for yourself how often guns are used defensively and how many end up being used to kill or injure someone by comparison.  Not even close.

The NRA extremists in the form of their leaders and their minions, have ratcheted up the fear and paranoia for so many decades that they have convinced a certain segment of gun owners that they should be afraid of their own shadows. They are afraid of the wrong thing.

Three incidents from the past day or two prove my point.

This one involved a black teen who got lost while looking for his school. He innocently knocked on the door of the home of one of those aforementioned paranoid and racist homeowners:

A black teenager was nearly shot and killed by a racist homeowner after missing his bus and trying to ask a neighbor for directions. (…)

“I got to the house, and I knocked on the lady’s door,” Brennan told the TV station. “Then she started yelling at me and she was like, ‘Why are you trying to break into my house?’ I was trying to explain to her that I was trying to get directions to Rochester High, and she kept yelling at me.”

“Then the guy came downstairs, and he grabbed the gun,” the teen added. “I saw it and started to run — and that’s when I heard the gunshot.”

The shot missed the fleeing teen, and Brennan said he kept running until he found a hiding place, and that’s when he broke down crying.

His crime was being Black and lost and knocking on the wrong door, apparently. And more from the boy:

“My mom says that black boys get shot because sometimes they don’t look their age, and I don’t look my age,” he said. “I’m 14, but I don’t look 14. I’m kind of happy that, like, I didn’t become a statistic.”

He was one of the lucky ones who did not become a statistic. But way too many do.

This gun owner should be held accountable for, at the least, reckless discharge of a gun and at the most, intent to injure or kill someone. Let’s see how this one turns out.

Another teenaged Oklahoma boy did, however, become a statistic. His own father shot and killed him in his haste to shoot first and ask questions later. Without that gun in his hand, his son would be alive today. And what did he do wrong? Let’s look:

When Tony Rutherford, 47, arrived in the middle of the night, he saw his older son’s pickup truck cut across a field. It was supposed to be parked.

According to the release, Rutherford “gave chase and fired his rifle at the driver several times.”

At least one of those rounds hit the driver, who was pronounced dead at the scene. That driver, found slumped over in the driver’s seat of the pickup, was later identified as Rutherford’s 13-year-old son.

“What is unique about this case is that we have a father who thought he was protecting an older son’s property, and in fact, he shot and killed his younger son, not knowing it was his younger son,” Jennifer Brown, OSBI spokeswoman, told KOAM.

Unique? No actually, incidents like this happen often enough in America as to be of grave concern. I have written many many times in this blog about family members “accidentally” killing each other when they mistake them for someone else and don’t use an ounce of common sense.

The boy’s death was totally avoidable and senseless. How will that father be able to live with what he did?

And then there is this, all too common stupid and dangerous use of a gun- an 8 year old had a loaded gun and fired it off while walking home from school with friends!:

Detectives said the gun is legally owned by a family member of the child.

Police said that the child took the gun that morning without the owner’s knowledge, and carried it to Harper Elementary in his backpack.

Lock up your darned guns everybody. Safe storage can save lives. Where is common sense?

Do I have to remind you all that these two gun owners were “law abiding” until suddenly they weren’t? And the parents of the 8 year old? I have no words. They were the “good guys” with guns that NRA VP Wayne LaPierre loves to talk about. As recently as the CPAC convention, mentioned in the above linked article, La Pierre was using the same old unprovable and nonsensical argument about those good guys out there with guns. And this happened just a week after the Parkland school shooting that shocked the nation and caused everyone to take a different look at the National Rifle Association. Take a look at the continuing rants of this man who represents a group that represents a very small minority of Americans- about 1.5% of us.

Wayne- we actually hate the shootings.

Gun ownership is going down. The NRA’s reputation is in the toilet. They are now part of the Mueller investigation.

What LaPierre and others sometimes talk about but don’t often do much about is that gun ownership requires not only common sense but responsibility, training, and restraint. Guns are lethal weapons designed to kill. And kill they do. They are the only product on the market not regulated for safety. There are no training requirements to own a gun and very few for carrying one in public.

We are changing the culture and the conversation more slowly than we should since the body count is increasing every year.

Finally the messaging of the corporate gun lobby is falling apart. It’s well past time for that to happen. Just as with gay marriage, the dangers of smoking and secondhand smoke and driving while drunk changed laws and the culture, so too will allowing loose gun laws to lead to a national public health and safety epidemic.

Candidates and lawmakers are now publicly stating their support for measures that will save lives and claiming their “F” rating from the NRA proudly.

Yesterday I attended my congressional district convention as a delegate. Not one of the democratic candidates running or current sitting lawmakers were against passing reasonable laws to protect our kids and communities from the devastation of gun violence. Even those in districts where many gun owners and hunters live agreed that something has to be done. I had many conversations with these leaders and candidate as did many in the room. Gun violence prevention was on the top of the list as issues of concern.

The Parkland students and students all over this country are telling lawmakers that they are no longer willing to listen to their BS representing gun lobby speak. Students and others in the Virginia, Maryland, DC area came out for a rally at NRA headquarters in Fairfax, Virginia yesterday.  They ( we) are not going away any time soon. We are more committed than ever to getting things done to save lives.

We are better than this and the public has had about #enough.