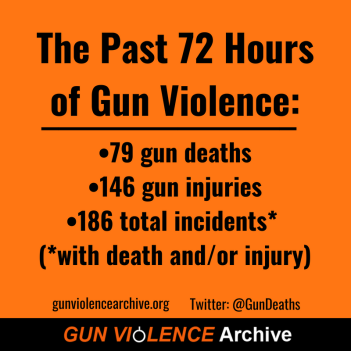 Today is the 19th anniversary of the shooting at a Los Angeles Jewish Community Center that injured 3 children, a teen counselor and an office worker,

People and kids just going about their daily lives when a White Supremacist opened fire. It was the shooting that propelled the Million Mom March as its’ founder Donna Dees Thomases watched in horror as those young children were led away from the scene holding on each other’s hands.

”It was too much to bear,” she said this week at her home in this wealthy suburban community. ”This is what life has become in America. You can’t send your kids to nursery school anymore and expect them to be safe.”

A few days after the shootings, Ms. Dees-Thomases turned her emotions into action. She scribbled a strategy on the back of an envelope: a plan to send thousands of mothers to Washington to pressure legislators into enacting tougher gun legislation. A week later, she applied to the National Park Service to hold the Million Mom March on May 14.

”We can’t just be sitting around our kitchens, crying about gun violence,” she said. ”We have to do something.”

Senseless. What was this man doing with a gun?

Over my years of advocacy I have met the parents of one of the children and of the teen girl involved in the shooting. They have also become activists and remain so even after their children are adults.

But the trauma never goes away. The memories are always there. That is the insidious nature of gun violence. The ripple effects spread widely and affect many.

In my last post, I wrote about my sister’s shooting death anniversary on Aug. 5th. It has been 26 years for me. For others it has not been as long. Here are just a few other August shootings that we ought to remember if we care about victims and their families and the devastation of gun violence in our families and communities:

On August 5th, 2012 six innocent people were killed and 3 injured by bullets in a hate crime shooting at a Sikh Temple in Oak Creek, Wisconsin.

This was another hate shooting. What was this man doing with a gun?

On August 6th, 1996 the daughter of a friend of mine in Duluth was shot and killed by her estranged husband as his anger increased over an ended relationship. Alcohol was a factor as well as the rage of a husband or partner when a woman is leaving him. This is the story we read far too often in local media reports. It is my story. It is the story of my friend. It is the story of thousands of Americans.

Why did he have a gun? It was too easy to buy one with no background check at a local Walmart store.

And on August 26th Alison Parker and Adam Ward were shot and killed on live TV as they were reporting a story for a CBS affiliate in Roanoke, Virginia. I have come to know Alison’s parents. They have been amazing advocates for common sense in the memory of their beautiful young daughter. The wounds are deep for them as they have lived around the hole left by their daughter’s untimely and violent death. Alison’s boyfriend, Chris Hurst ran on a platform of gun violence prevention and won a seat in the Virginia House of Delegates. He will not be a lapdog for the gun lobby.

Why did this shooter have a gun?

Of course there are others. The Gun Violence Archive is keeping track. If you check out this report from the last 72 hours, you can see the long list of shootings all over our country and it’s only August 10th.

These incidents happen every day of every month. It’s an American tragedy.

Why remember these shootings or any shootings for that matter? The gun lobby wants us to forget that this many people are shot and killed on a regular basis because then we might go away and stop pushing for reasonable laws to stop the carnage.

The corporate gun lobby has no common sense when it comes to guns and gun violence. That is becoming increasingly obvious as we learn more about the involvement of the NRA in the Russian meddling into our 2016 Presidential election. Apparently anything goes for the organization that was supposed to be supporting law abiding gun owners.

Who are they? It’s past time to expose the gun lobby’s single focus on suppressing any talk of or actions that would lead to saving lives by supporting lapdog politicians who will do their bidding. Things are changing however as candidates have decided they can run on the issue of common sense gun legislation and win. That’s because the public has finally had #enough and the accumulation of bodies from mass shootings is more than we can take.

End Family Fire is about safe storage of guns. The thing is, too many people are not responsible with deadly weapons. Check out this story about the campaign:

The new campaign, “End Family Fire,” begins on Wednesday and aims to educate the public on the importance of safe firearm storage. “Family fire,” a phrase created for the campaign, refers to shootings that cause injury or death and involve improperly stored or misused guns found in the home.

“We want everyone who is driving down the street, listening to the radio, watching TV, to hear this term, to go to our website and to internalize what family fire is,” said Kris Brown, a president of the Brady Center to Prevent Gun Violence, the gun control organization leading a coalition of groups behind the campaign, which it produced in partnership with the Ad Council, the nonprofit.

Watch one of the videos:

8 children a day are killed or injured by guns. Is that the America we want? The answer, of course is a resounding NO. But what are we going to do?

The narrative must change in order for the issue to change our elected leaders and also our national conversation about the role of guns and gun violence in our American society. This campaign is like MADD and the campaign on second hand smoke. They both changed the culture, the conversation and the laws. Social norm change comes slowly and while we are waiting, people are dying.

We just can’t afford to let that happen.