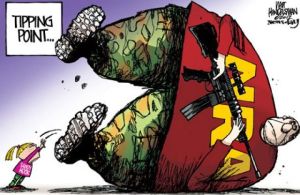 I have been away from my blog while attending the Brady Summit in Washington D.C. hosted by the Brady Campaign to Prevent Gun Violence and the American Public Health Association. Hundreds of attendees were inspired, saddened, educated and energized by like minded people on a mission. The tide is turning. We can feel it and we know it by the public responses to the recent tragedies. We see the testimonials. We hear the speeches. We watch as the news media is changing what they are saying about the issue and at least some politicians are finally speaking the truth about our national gun violence epidemic. Thank goodness. It’s far far too late for way too many. But it’s a step. And I hope it will be the slippery slope towards common sense.

I wrote in my last post about the article on the CNN website written by Dan Gross, President of the Brady Campaign. We have reached a tipping point on the issue of gun violence.

A recent shooting in Virginia which ended with the murder of 2 journalists on live TV was a tipping point. At the Brady Summit, one vey inspiring and emotional moment came when Andy and Barbara Parker, parents of Alison Parker, one of the Virginia journalists, spoke to the attendees. Here is a video of Andy Parker’s remarks:

Let’s do this for Sarah and Jim Brady and for Alison. Let’s not let our mission be derailed by those whose interests are in keeping gun industry profits high and keeping gun lobbyists in business. For too long, those voices have drowned out the voices of victims and survivors. Not any more. We will not be silenced.

Meanwhile, as advocates were learning from the experts in public health and safety, suicide prevention, physicians, attorneys, elected officials, victims, state advocates, and others-   these are the things that went on in our country while we weren’t paying attention:

You can read much more about the world of firearm accidents and intentional deaths at several good sites:

Don’t you find it amazing that there are so many sites reporting on accidental and intentional gun discharges? Only in America. But much of the research and reporting is coming from sites like this. Since the NRA owned Congress members made sure government agencies can’t research the causes and effects of gun violence, it’s good news that others are stepping up.

One of the best sources of information outside of the public health researchers is the on-line publication, The Trace. In one of today’s articles, we learn that the ATF only monitors 7% of gun dealers in a year. That is a crime, actually.

Where are crime guns coming from? Many from “bad apple gun dealers”. You can read more about that in this piece from the New York Times today:

Mr. Cuomo, a Democrat, has pledged to throw his weight behind the Brady Campaign to Prevent Gun Violence, one of the country’s most prominent gun control groups, in an as-yet-unannounced effort demanding that the Justice Department more closely scrutinize so-called bad apple gun merchants, according to people familiar with the campaign.

Mr. Cuomo, in an interview about his plans to work with the Brady Campaign, promised that his involvement in national gun politics would continue to deepen. He said he would hit the campaign trail in 2016 to emphasize the issue of gun violence, which he repeatedly called “the big issue” in national politics. (…) To start, Mr. Cuomo will be among the chief signatories of a letter to Attorney General Loretta E. Lynch, to be released as early as next week, urging the Justice Department to punish what the Brady Campaign describes as a small fraction of gun dealers who sell an overwhelming share of weapons used to commit crimes. He has promised to lobby other governors around the country to join in the push.

Yes, we can do something about gun trafficking and crime guns and we will.

But I digressed. I sat at a table with a BBC reporter at the Brady Summit on Tuesday. She was doing a story on America’s fascination with guns and the lack of ability to change the minds of Congress when so many Americans want change. She was stunned at the American gun culture and our seeming tolerance for the carnage. It was unfathomable to her that we have failed to act. These things are just not happening anywhere else in the world. But she was also encouraged that groups were working state by state to change the gun laws that don’t get passed in Congress. That was news to her. As Connecticut Governor Dan Malloy spoke to the summit attendees, she paid attention to his remarks about how hard it was to get new laws passed even in the state where the massacre of 20 small school children occurred.

I explained to her about the insidious corporate gun lobby and the fear of said lobby affecting too many of our elected leaders. The lies and deceptions keep coming as the influence of the gun lobby wanes. You can read about the latest from the NRA’s own Mr. Wayne LaPierre in this Media Matters article:

The NRA’s lie is brazen given widespread reporting explaining how the gun group interferes with ATF operations. As USA Today reported in 2013, “lobbying records and interviews show the [NRA] has worked steadily to weaken existing gun laws and the federal agency charged with enforcing them.”

According to The Washington Post, “the gun lobby has consistently outmaneuvered and hemmed in ATF, using political muscle to intimidate lawmakers and erect barriers to tougher gun laws. Over nearly four decades, the NRA has wielded remarkable influence over Congress, persuading lawmakers to curb ATF’s budget and mission and to call agency officials to account at oversight hearings.”

The NRA’s opposition to the ATF has been extreme. The gun group has threatened to attempt to abolish the agency all together and LaPierre infamously called federal law enforcement agents “jack-booted government thugs” who wear “Nazi bucket helmets and black storm trooper uniforms.”

While lobbying on Wednesday at the Hart Senate office building, a group of us were standing with our”Background Checks Save Lives” stickers on and managed to attract attention and comments from quite a few people. One of them was a Senate staffer who was not American born but worked for a Senator who he said did not agree with us. The thing was- he himself agreed with our views and shook his head as he tried to figure out why America is so gun crazy and so violent. I told him that the majority in his Senator’s state agreed with us and he should go back and check the polling date to share with his boss.

For if our own leaders fail to represent us- the majority and the victims, survivors, experts, researchers, law enforcement, clergy, youth, gun owners, health care providers, educators, hunters, and others who want gun safety reform, what else is there? Congress must act. Our state legislators must act. They are now hearing from the millions who want to get this job done in the name of the victims.

We are marching forward towards saving lives in spite of stiff resistance. We are holding our elected leaders responsible and asking them to commit to measures to keep us all safer in the halls of Congress and state legislatures. The tipping point is here.

We have had #enough. If you have also had enough, check out the #enough campaign on the Brady Campaign’s website.