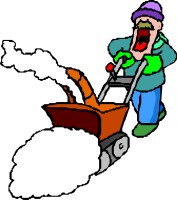 You really can’t make this stuff up. A guy with a gun, ostensibly to be used in self defense, goes on the offensive for no apparent reason and a Michigan woman is tragically and senselessly dead:

Wendell said when he saw Bonge outside on Tuesday, Dec. 26, he made the decision to kill her. He told police he grabbed a gun from his home and went out to the driveway easement in front of his home where she was snowblowing, the affidavit shows.

Wendell said he went up behind Bonge, shot her in the back of the head and disposed of her body behind his residence on the 14000 block of 104th Avenue, according to the affidavit.

Seriously. This is the problem with guns in so many hands. They might just get used to kill someone in a moment of anger, frustration, craziness or whatever gets into the heads of people like this guy.

In my neck of the woods, I’m very familiar with snow blowers. They are not dangerous unless you put your hand into the machine which most people with any common sense understand. And often people help out their neighbors by snow blowing their driveways or sidewalks. My husband has done this many times and our neighbors have done the same for us. Snowblowers can be noisy. But so what? The idea that someone could get shot for this is insanity itself.

I have written before about killings over lawn mowing and other absurdities.

The gun extremists will tell us ( and they do tell me in comments) that these are just irresponsible people with guns. The thing is, people are responsible and/or legal until suddenly they are not. With a gun in hand, split second decisions to use it can and are deadly. There are far too many irresponsible gun owners out there. That is our problem.

Guns are deadly weapons designed to kill people. And kill they do- every day in large numbers.

Last night I met my new Senator Tina Smith. While there I spoke with many people in a roomful of about 200 folks about the gun issue. One woman had run for office and lost her election for a seat in the state legislature. She talked to me about the difficulty of the gun issue in her district. She said it is a district full of gun owners. Most Minnesota districts are full of gun owners. And she also said they were against common sense legislation on Brady background checks, for example. My answer was that even the gun owners in her district most likely represented the average American who time after time after time after time have agreed in polling that background checks are a good idea. The people she was hearing from were the minority of people and candidates need to be able to speak that truth. When elected while favoring reasonable gun measures a leader will represent the overwhelming majority of Americana and gun owners.

I also spoke with a state Senator about the forced departure of Minnesota Representative Tony Cornish, the NRA’s “go to” guy on guns. We were not sad to see him go. He left because of allegations about sexual harassment filed by several, including a lobbyist for a gun violence prevention group. The irony.

Cornish openly carried a gun around while at work in the Capitol and frankly intimidated people who did not agree with him. He also supported loosening conceal and carry laws, permitless carry and stand your ground legislation. He saw no problems with just about anybody owning and carrying guns.

This letter from former Representative Tony Cornish was found on a Twitter feed: 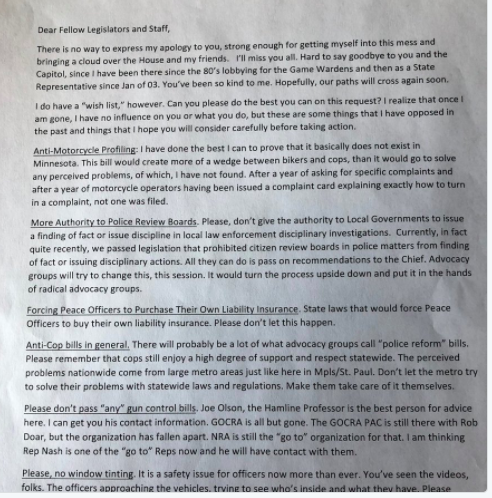 He is imploring other Representatives not to pass any “gun control” bills or “anti-cop” bills. He also admits that a pretty influential group representing gun owners has disbanded (GOCRA). Not sad about that one. This group has tried hard to wield their influence but they have not succeeded at much other than intimidating law makers. They did manage to sink gun bills that would have actually strengthened gun laws and saved lives in 2013 after the Sandy Hook shooting. I don’t think that is anything about which to be proud.

The NRA represents a small minority of Americans and gun owners:

Three-in-ten U.S. adults say they currently own a gun, and of that group, 19% say they belong to the National Rifle Association. While the demographic profile of NRA members is similar to that of other gun owners, their political views, the way they use their firearms and their attitudes about gun policy differ significantly from gun owners who are not members of the organization.

19% of 30% = 5.7%. And for this, we are allowing an influential lobby group to make gun policy? Real people are losing their lives every day and we are afraid of 6% of Americans?

The sooner our leaders and candidates recognize this we will be in a safer place in our country.