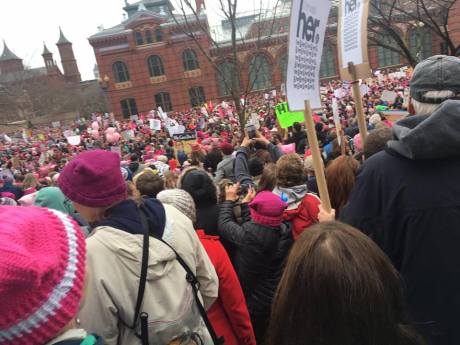 My sister was a feisty woman. She would have marched with me or for me if she had not been shot and killed in 1992 by her estranged husband. Women are 11 times more likely to lose their lives to gun violence than women in other countries. Why is that? Because Americans have more more guns in their homes than in other countries and they are not often stored safely locked and unloaded. Why is that? Because the corporate gun lobby has deceived us by making the case that guns in homes for self protection will protect people from harm. Instead, those guns get used more often to kill someone in the home than to be used to scare off a home invader.

As a Brady Campaign chapter leader, Brady Campaign/Center Board of Trustees member, Board member of Protect Minnesota and Domestic Abuse Intervention Program, I carried many people’s names with me because they wanted to be part of the march. I asked and they answered. Over 100 of my friends and family members asked to have their names on my sign. It was because of my passionate advocacy to prevent gun violence and in memory of my sister that so many wanted to “march” with me.

Thousands of Brady Campaign chapter members marched in cities all over America and came to DC to be a part of the most historic march in our country. Many of them were victims who were marching for loved ones. The surreal crush of marchers prevented us from meeting up as I had thought I could do. If I could have polled the marchers, I am certain that every one of them would have supported requiring Brady background checks on all gun sales. We know that a vast majority of Americans agree to that.

About 100 women were willing to endure 2 nights on a bus with little sleep, living on snacks and fast food and cramped quarters to become a part of this large movement.It was a movement created by @realDonaldTrump himself:

That man is in power now. He is slowly reshaping his press coverage to his specifications, floating the idea of “putting in his own security and intelligence community,” whatever that might mean, and praising authoritarian leaders who crack down on dissident populations. The Women’s March will be remembered as a global rebuke to this administration and the manifestation of a massive political will to resist. But if it does what protests should — if it provokes a response — much more will have to come from it.

Before I left on the bus, my family expressed concern about my safety considering that sometimes “protests” and marches turn ugly and violence breaks out. I was more concerned about finding bathrooms and making sure I would not lose my friends. But as we walked from our where our bus was parked at RFK stadium to the beginning of the march, it was obvious that this was going to be something huge. I will never forget all of the bus riders starting their own march as we found our way to Independence Avenue. I will never forget the residents of the row houses standing on their lawns thanking us for coming. I will never forget the man who asked if he could hug me as I walked by his house. I will never forget the volunteers of a neighborhood high school opening up the school for marchers so we could use their bathrooms and get information.

And I saw no guns anywhere, thankfully. Guns in a large crowd would be a recipe for an accident or senseless tragedy. But the corporate gun lobby, of course, would have encouraged armed citizens to march. Because….rights. Marches all over the country were peaceful, polite, almost cheerful and very friendly events. That was one of the hallmarks of the march. Police officers thanked us for coming and we thanked them for being there to protect us, to answer questions, and to control the very large number of marchers.

Marching in DC on Saturday was an honor and a truly overwhelming experience for me. Like the Million Mom March, the Women’s March changed my life. I know that my advocacy is not for naught. I know that Americans with common sense –safe families and safe communities free of devastating gun violence. I know that we can all make a difference if we stand together and make our collective voices heard.

It was clear to me that the only way to make that happen is take steps to make it happen- both large and small. This is not the time to sit back and let others do the work. This is the time to get involved. The Brady Campaign and Protect Minnesota have been my way to be involved. As a victim of gun violence I have spoken out for many years as a chapter activist and worked hard to advocate for victims and survivors. I know many who have done the same. And now I know that millions more activists were born last Saturday and they are ready to act on the many issues that @realDonaldTrump is determined to affect.

If you marched anywhere in the country, thank you.

If you marched or if you didn’t march, this is no time to be silent. Now is the time to speak up and contact your local, state and federal elected leaders about what your concerns. Tell them in a simple message about what you want to see happen and say you are a voter and so are your friends and families.

This is how change will happen. Let’s get to work.