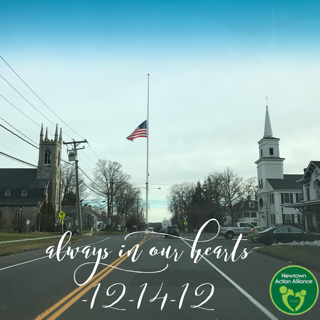 Just because @realDonaldTrump was elected to be our next President doesn’t mean the gun violence prevention groups are going away. In fact, they will be louder than ever. They must be because lives depend on it.

Gun violence will not stop. Mass shootings will continue. Our families and communities will not be safe from gun violence until we do the right thing.

26 children and educators are shot and Congress does nothing.

33,000 Americans will die every year unless Congress does the right thing.

Today is the 4th anniversary of what most can agree was the worst mass shooting in our country though it took fewer lives than some of the other mass shootings. You know what I’m talking about.

20 first graders brutally shot to death and 6 educators who tried to protect them.

We should not have to protect our school children from gun massacres. America is unique in that we have more mass shootings than any other democratized country not at war. And when a mass shooting happens other countries with common sense do something to at least try to stop the next one. And in most cases, it has worked.

Of course. That is because common sense informs most of us. The fact that our Congress could not even pass a simple law to require background checks on all gun sales several months after the Sandy Hook shooting is a shameful and hideous black mark in our history.

There will be events all over the country today. You can check it out here. Newtown Action Alliance was formed after the Sandy Hook shooting and invites victims from all over the country to Washington D.C. for the national vigil. It is a sober and reflective day with tears and hugs. It is a remembrance of all victims of gun violence. It is a reminder that our leaders have not done the right thing.

It has been 4 years and yet our leaders have not done the right thing.

My local chapter viewed the award winning film, “Newtown” on Sunday. It was a powerful testament to the resilience and resolve of the survivors of that shooting. Everyone grieves differently and at their own pace. Some choose to do so in silence. Some have become activists. None will ever be the same. And again, we see the ripple effect of gun violence in the Newtown community. Every one of our elected leaders should be required to view the film.

Today we will hold a candlelight vigil at a local church.

The Brady Campaign has this to say about the anniversary of the Sandy Hook shooting:

“In the wake of this unthinkable tragedy, America demanded action from Congress. And when Congress failed to act, Americans took matters into their own hands. With a successful vote in Nevada this fall, seven states have expanded Brady background checks to all gun sales since the attack on Sandy Hook Elementary. Today, half of all Americans live in states where Brady background checks are ensuring felons, domestic abusers, and dangerously mentally ill people can’t buy guns. We’ll continue this state-by-state march until Congress steps up and finishes the job for all Americans.

“Some in the gun lobby’s world might see Newtown’s tragedy, and others since, to be the unavoidable consequences of ‘doing business’ today. We don’t accept that. The Brady Campaign and an overwhelming majority of the American people have a different vision, and we’re not giving up. Buoyed by four years of inspired progress, we fight on to make this the better, safer nation that the children and educators we honor today deserved.”

The American people want Congress and state legislators to listen to them and do the right thing.

Will they read these names and see these photos today?

No more silence. Listen to our voices. Look at the photos. Read the names. Hear our stories.

Do the right thing.