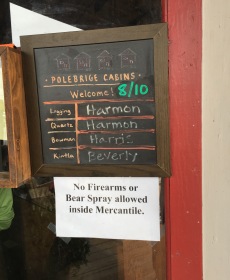 I posted earlier about a trip I was going to take with my family to Glacier National Park and to Seattle. I also posted about the gun laws in the states we would be traveling through on the Amtrak just as a way of comparison of gun laws. Montana, where we stayed for 4 days, has pretty loose gun laws and a high rate of gun suicides. From this article from The Trace, we find this:

Where the distinctive cause of death is gun suicides, the numbers also show much larger than usual shares of residents owning guns. Researchers led by epidemiologists at Columbia University calculated last year that Alaska, Idaho, Montana, and Wyoming placed in the top six for state gun-ownership rates. At 62 percent and 57 percent, respectively, Alaska and Idaho are double the national gun ownership rate of 29 percent that the researchers used as a baseline.

The lethality of guns means that people who attempt suicide with them are more likely to succeed than those using other means.

In Montana, many of the gun deaths are suicides which we don’t usually hear about in the news unless it involves others as in mass shootings or domestic homicide/suicide. Of course we heard nothing about gun deaths while traveling but I do need to say that I did not see one gun while on our trip. I looked to see if anyone was open carrying. I suppose there could have been folks carrying concealed and I didn’t see it. But I also know that many of the people we saw were tourists with their families, likely with no interest in carrying a gun around.

While visiting Glacier Park we took a guided hike through the Trail of the Cedars to Avalanche Lake. 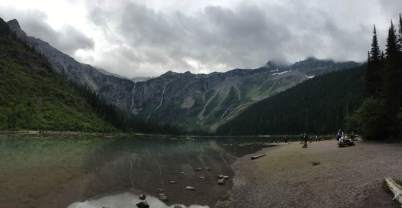 It was stunning and amazingly wild. There were signs along the way suggesting what to do if one encountered a Grizzly Bear which some folks we talked to had seen. Our guide was not carrying a gun. They have common sense measures to avoid bears or deal with one if sighted. The National Park Service issues these warnings and safety tips without mentioning carrying a gun. We could have purchased bear spray in many places along our way but didn’t.  In fact, we were disappointed that we did not sight a bear off in the distance.

We did notice however, that our hotel in Whitefish, Montana posted a sign saying that guns were not allowed. And as you can see by the top photo on this post, the famous Mercantile store in Polebridge, Montana, an outpost at the far north end of Glacier Park and very isolated, does not want either guns or bear spray inside. 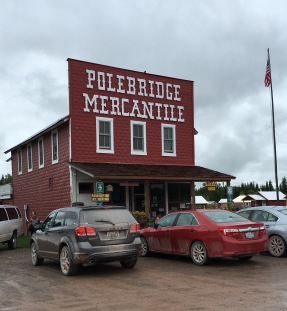 I can see why. It was crowded inside- lots of tourists and locals go there for provisions as it is the only place around for many miles. It’s historical purpose was to provide explorers and early visitors to the Park with food and other needed items for their trip into the wilderness.

While there we enjoyed the baked goods, sandwiches and Huckleberries we bought before we went into the amazingly beautiful Bowman Lake campground located within Glacier Park showing us another blue-green glacial lake. The day was rainy with low clouds so we did not get the view we hoped for. But it was beautiful nonetheless. 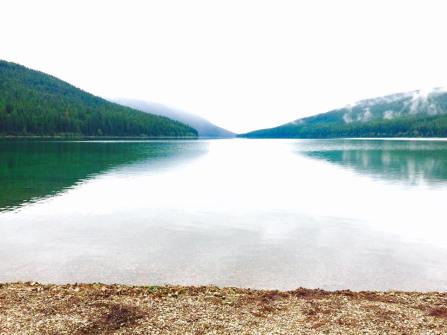 Seattle, of course, is located in a state where the citizens decided for themselves that they wanted to require background checks on all gun sales. It is a funky and unusual city hosting the Pike Street Market with a sea of humanity, and the Space Needle where tourists gather to wait to go up into the Space Needle for the spectacular view. Guns are not needed there either. One vendor in a wheel chair who promised my granddaughter and I 2 magic tricks for $5 called me a liar in a loud voice when I said “maybe later”. He was right of course. I had no intention of buying his magic tricks. It did not end in any confrontation but I suppose it could have and people have been shot for less in angry confrontations.

At the top of the Space Needle the view was spectacular. This was also a very crowded place with shoulder to shoulder visitors. The beauty was incredible on the clear day we visited. Mount Ranier was showing off for us. It is unimaginable that anyone would want or need to carry a gun there where tourists were crowded in from countries all over the world to see the view from the top. 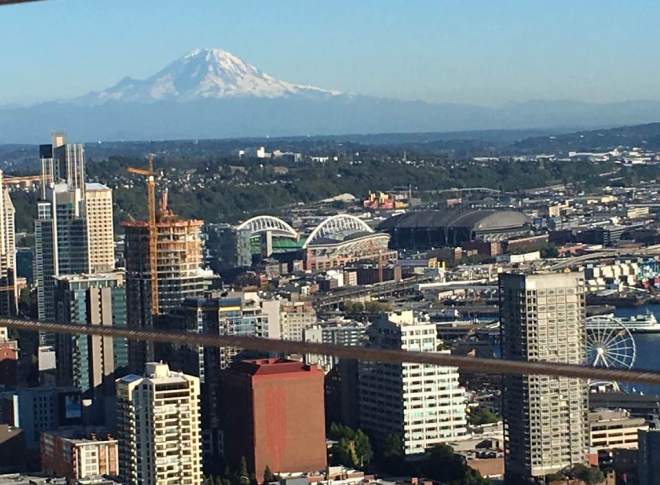 (By the way, our bags were searched there as well for weapons or other contraband or dangerous items.)

So in the wilderness, the parks and the big cities, I saw no need for a gun. The Amtrak train depot had explicit instructions for declaring any guns and that they had to be packed in stored luggage and not on the train. In small compartments and aisles on trains that are jerking around and coming to sudden stops, one can see why a gun would just not work out well.

In 2009 Congress passed a Credit Card bill necessary for the economic recovery. In the sausage making of the bill and the need for the corporate gun lobby to get its’ fingerprints on just about anything, an amendment was added to the bill to allow guns in our National Parks. It was a bad idea. Most people thought it would not be a problem. But as we know, we are beginning to see the results of our guns everywhere gun culture where “accidental” discharges are happening just about anywhere some person with a gun who doesn’t understand that they are not needed everywhere, drops a gun or a gun drops by itself through carelessness and discharges. Sometimes there are deaths and injuries, other times not.

More guns are not making us safer.

There have been incidents of gun discharges in our National Parks. According to this article, they may be an anomaly but if one person were to be killed we would likely not call it an anomaly.

Last week a careless man carrying a gun into the Old Faithful Lodge, “accidentally” discharged his gun. Guns are not allowed in the Lodge but they are allowed in the Park. The result? A shot rang out where hundreds of tourists were trying to enjoy their vacation. From the article:

Charissa Reid, a spokeswoman for the park, said a maintenance worker reported to park law enforcement Wednesday afternoon that a gun went off inside a men’s bathroom at the Old Faithful Lodge.

No one was injured. The shot is believed to have been accidental, based on statements from multiple witnesses, including at least one who was in the bathroom at the time.

Park rangers are investigating but have not been able to identify the man with the gun. He is presumed to have fled after the incident. (…)

People are allowed to carry guns inside Yellowstone National Park. A ban on firearms inside park boundaries was lifted in 2010. But people aren’t allowed to bring guns into any of the park’s buildings or any of the buildings operated by the concessionaire company, like Old Faithful Lodge.

Shooting a gun inside Yellowstone National Park is illegal.

I have a question. If shooting a gun inside of the Parks is illegal, why carry one in the first place? Just asking.

Another place that guns will not be allowed this year is at the Minnesota State Fair. From the article:

No weapons of any sort will be allowed on the fairgrounds, he said. No fireworks — “we have plenty of our own.” Ditto for alcoholic beverages.

No need for guns at a State Fair. Most state fairs do bag searches and require people to go through metal detectors. As it turns out, guns have been banned from the State Fair for a long time now and the gun rights activists don’t like it. But I am guessing they among the small minority who think guns are a good idea at a fair, teaming with people, small kids running around and babies in strollers. We know that loaded guns have been “accidentally” discharged in many public places. This is about public safety and nothing else. The gun rights folks cannot guarantee that everyone with a gun will be safe with that gun while carrying. Guns are lethal weapons designed to kill or harm others. There are no reasons to take chances in public places where families and large crowds of people gather.

We are better than this. It’s time for all of us to put our heads together and work out the best way to keep Americans safe from gun violence. Since the majority wants that to happen anyway, it’s our leaders who have the onus to make it happen. It’s up to the rest of us to pressure our leaders, change the conversation and eventually the culture of gun violence that only occurs in America.

Speaking of traveling, we did rent a car while visiting Glacier Park. This Tennessee family found a loaded gun in their rental car where 2 small children were sitting. Luckily they found the gun before something tragic occurred. This is just not OK. There are too many careless gun owners out there not thinking about the consequences of their carelessness. There are no excuses for carelessness with guns.

6 thoughts on “My travels with no guns”