Can we talk more about Donald Trump, guns and violence? Trump has already predicted riots if he does not become the Republican nominee this summer. The last time I checked, America is not a country where elections are decided by violence. This bravado and threatening rhetoric is dangerous and I am not the only one who has noticed. Republicans themselves are speaking out against the way Trump is ramping up violence at rallies and at election time. No less than Senate Majority Leader Mitch McConnell has spoken with Trump about the violent talk:

The Hill reported Monday that McConnell called on Trump to condemn the violence that has erupted when protesters attend his rallies.

U.S. Senate Majority Leader Mitch McConnell has urged Republican front-runner Donald Trump to speak out against the violence that has followed him from rally to rally around the country.

Trump has blamed supporters of Democrat Bernie Sanders for the violence.

“I mentioned to him that I thought it would be a good idea for him no matter who starts these violent episodes to condemn it,” McConnell said, according to the Hill.

Never mind. Donald Trump has not taken any responsibility for what is happening at his rallies or his own talk about riots and violence.

A right wing conservative author has threatened folks who are anti-Trump saying his “side” has guns:

On March 16, conservative author Mathew Vadum took to Twitter, and threatened MoveOn.org saying, “Note to MoveOn anti-free speech thugs: Our side has guns, tens of millions of them. Behave yourselves. #tcot.”

Hmmm. Behave yourselves. I suppose he believes that his side, the one with the guns, doesn’t have to behave themselves? So to be clear, armed Americans who make threats like this in a democratic election are threatening democracy itself. They must believe that their rights trump everything else. Be careful out there.

In this article, one of a series for the Washington Post, voters are interviewed about their support for candidates. One man revealed his views on guns and the second amendment which seem to fit with what candidate Trump is ramping up in his own remarks. From the article:

There were swells of buttons on the coats of people all around him: “Bomb the S— Out of Isis,” “Hot Chicks for Trump,” “Hillary for Prison in 2016.” Alexander’s political interests came to him late. His mother told him that all politicians were liars. He had voted once before, for Obama in 2008, but quickly grew to regret it, thinking that Obama had gone too far in seeking gun control. Opposing gun control became Alexander’s first cause. He bought two handguns and an AR-15. He became so obsessed with Second Amendment rights that at one point he drew up a banner and stood on a Highway 20 overpass with it: IMPEACH OBAMA. Then he started listening to his boss and mentor, Rep. Rod Blum, a local congressman, who told him he had to become more reasoned in his political actions.

Reasoned? Do you think? Is this who we are as a nation? I ran across this article that suggests that it is:

I do not mean to suggest that the depiction of violence should not exist in dramas high and low. Violence is an unfortunate fact of life nearly everywhere—but in America it is virtually worshipped. Many of our highest-grossing movies drip with blood. And let’s not even get started on the video games.

Donald Trump, showman that he is, instinctually knows all this. It is a fact inescapable to anyone who watches television ratings as closely as does the likely Republican standard-bearer. (…) With the Trump candidacy, violence is not merely the outcome of a toxic campaign; it’s the show, it’s the game. A feature, not a bug. And a savvy, cynical calculation of the kind of show that turns America on.

Wow. What kind of country are we or do we want to be? We do know that America leads the world in gun deaths per capita and also with the most guns per capita. That should not be something of which to be proud. A minority of Americans subscribe to the views of the corporate gun lobby and manage to grab the headlines to strike fear into the hearts and minds of those who believe them. And some elected leaders not only back away from this powerful lobby but they, themselves, espouse these same views. Over the past 30 years or so, rather than doing the common sense thing to prevent at least some of the lives taken by firearms, we have managed to loosen the laws and change the culture so that now people are carrying loaded guns around in public places and able to stand their ground when they shoot someone perceived to be a danger. We have a violent culture.

Everything we do seems to go back to those inalienable rights to … er uh…. God given right to bear arms. Those rights are touted to stop any number of reasonable things in our country. No matter what, the gun lobby gets its’ nose under the tent. Now it’s Supreme Court nominees. Apparently President Obama’s nominee to replace Justice Scalia is a gun grabber. Of course. Let’s look at this article from The Trace:

But until very recently, the kind of broadside attack the group launched on Wednesday against Merrick Garland, President Barack Obama’s nominee to fill the vacant seat on the Supreme Court, simply wouldn’t have happened. That’s because the NRA respected the longstanding tradition that allowed Senators to “advise and consent” on judicial picks without fear of retribution.

There was also this fact: Judges can be particularly difficult to assess, because some never even hear a major gun case, or their involvement in such cases hardly illuminates their judicial opinion on the scope of the Second Amendment.  (…)

Now the NRA says Garland, Obama’s pick to replace Antonin Scalia, does not “respect the individual right to bear arms.” In 2007, Garland, who is viewed as a political moderate, cast a vote in favor of allowing his court to review a crucial opinion by a three-judge panel that had found D.C.’s handgun ban unconstitutional.

Once again, the NRA appears to have overreached. Most legal experts say Garland was not explicitly suggesting he disagreed with the decision to overturn the ban, but rather acknowledging that it broke with longstanding judicial precedent, and therefore merited greater scrutiny.

If Merrick ever appears before the U.S. Senate — itself a question very much in doubt — his record on guns is sure to be at the center of the proceedings. The question is: Which narrative will take hold?

If you do anything that smacks of common sense in the interest of public health and safety the “gun grabber” label is attached and, unfortunately for us, it seems to stick. We must be better than this.

And so, guns and violence are a part of our election talk for 2016. In response to Donald Trump’s statement that he could shoot people on 5th Avenue and still not lose voters, supporters of the Brady Campaign held a protest outside of Trump Tower in New York City.:

Similar to his Republican competitors, Trump touts his support for the Second Amendment and promises to veto President Obama’s recent executive actions on gun control, if he is elected into office on November 8. Among his gun beliefs, Trump thinks arming more Americans with firearms could prevent mass shootings. He is a proud member of the National Rifle Association and publicly has said he owns both a gun and a concealed-carry permit. At the October 28 GOP debate, the billionaire said he carries a gun in New York “sometimes a lot” to be “unpredictable.”

It’s true. 90 Americans a day die from firearms injuries. That is what Donald Trump should be concerned about.  More from one of the protesters:

Coney Cinco, of Brooklyn, says she hadn’t demonstrated prior to Wednesday, but joined to help spread the Brady Campaign’s message.

“Thinking he can shoot anybody without repercussions, it’s scary. That could be me he shoots at,” she says.

Robin Frank, of New York City, also participated and says “enough is enough.” “The violent rhetoric of his campaign is abhorrent. We can’t have a man running for president who speaks so glibly about shooting people in the street,” she says. “I’m just sick of hearing all of the violent rhetoric from his campaign. It’s frightening.”

I am adding to this post to include some photos of the protest/”die-in” in front of Trump Towers courtesy of (and with permission of) photographer Joe Quint: 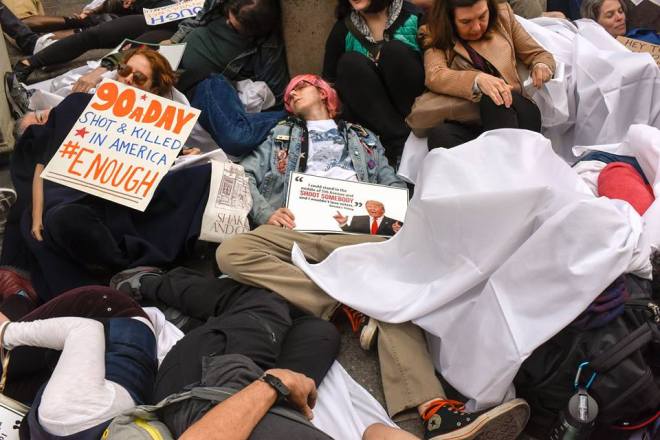 This is what should be frightening.

On Tuesday night, after the Illinois polls closed a thunder storm hit Chicago. Lightning struck the Trump Tower building. Poetic justice?  One is more likely to be shot than be hit by lightning.