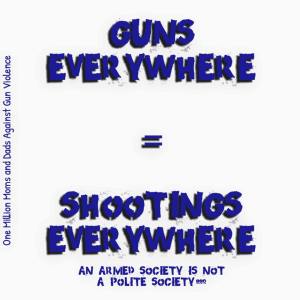 Thank you to One Million Moms and Dads Against Gun Violence for the image on the left. The numbers of parents and others against gun violence are surging. Why? Because we don’t believe that guns everywhere are making us safer. We can read the news articles and the headlines. Some of us have lost loved ones to bullets. We understand that we can do something about this constant and unsettling barrage of stories about shootings. In the last 2 days there were 2 college shootings. 2 more dead and 4 more injured. And this was a week after 9 were shot and killed and 9 others injured at Umpqua Community College in Oregon.  A Texas professor has gone public with his resignation saying he doesn’t feel safe with all of the guns around and when the Texas law allowing students to carry concealed guns on campus goes into affect in August, he doesn’t want to be there for what might likely happen.

There are millions of Americans who are angry and appalled at the latest violent incidents in the country. The headlines read like a country at war. In fact, in my local newspaper this morning there were 2 headlines for articles that appeared next to each other. The one on the left stated: “Two students die in shootings at Texas, Arizona college campuses“. The one on the right reads: ” Violence spreads to Gaza, where Hamas leader calls for uprising.” And then on another page, the headline reads: “Obama in Roseburg urges nation to ‘come together’ over gun violence.“ My paper chose the headline above when running an article that appeared in the Los Angeles Times by Maria L. La Ganga where the headline read: “Obama, visiting Roseburg families,is confronted by angry gun rights activists“.

Appalling. The hatred and extremism of the folks protesting a visit by the President of their country to comfort yet the latest families by gun violence is inexcusable. If his had happened to any other President, we would have been calling these folks insurrectionists. The definition, from the link: “an act or instance of rising in revolt, rebellion, or resistance against civil authority or an established government.” Well?

But because it is the right wing extremists, so ugly in their hatred of a President who has done nothing to take away their rights or their guns, somehow they get away with it. Where else can people stand with loaded openly carried guns when the President’s motorcade comes by? And why were they allowed to do this? Rights? Armed intimidation by angry citizens?

There is a disconnect between reality and policy. It’s fueled by angry armed people who have been deceived by the corporate gun lobby and others on the right side of our political spectrum. It keeps them agitated and voting.

Which is it? Will we come together as a nation over gun violence or will the angry gun rights activists who represent a very small minority of Americans get their way because they are angry and armed? Time to start thinking about what this means. Decisions in America are not made at the end of a gun barrel. Bullets will not decide who will lead our country. If it comes to that, our democracy will end and we will become no better than the countries we criticize because they are constantly at war and where violence reigns.

Also in my local paper, a letter to the editor claimed this: “Arming everyone is the answer to gun violence”:

There is just one obvious answer: Allow everyone to carry a gun either openly or concealed. Then, when some bad guy starts shooting, those around him will be able to defend themselves and others. This sounds a little crazy, but is there any other answer?

The suggestion that everyone should be armed is, of course, nonsensical given the facts. In developed democratized countries not at war, there are no headlines like the ones in my morning paper. Of course there are other answers and they don’t involve arming everyone. Guns in the hands of angry gun rights activists are not normal in other countries not at war. It should not be normal here.

What we have learned about most of the shooters involved in the latest rash of shootings on our campuses is that they were fascinated with guns and their parents even encouraged that fascination. The shooter in yesterday’s Arizona campus shooting, for example, loved his guns. And we found out after the Umpqua Community College shooting that the young man who decided to end the lives of 9 people also loved guns and was well versed in gun laws. He had a stockpile of guns which, at this point we are not sure whether were all purchased by him or also his gun loving mother. He was also someone who had developmental and emotional difficulties and should not have had easy access to guns.

A headline in another area newspaper said this: “‘Lucky One’, Matthew Downing, gives first statement about Oregon Community College massacre.” According to this account from one of the survivors, the Oregon shooter mercilessly slaughtered other human beings as though he was a machine. What happens to people when they have these kinds of thoughts and feelings and also access to guns? Something goes terribly wrong and innocent people are killed. From the above article:

Downing did so and said at that point Harper-Mercer fired into the center of the room and began asking students one by one if they were religious. The shooter fired at one student who said he was Christian and another who said she was Catholic.

The shooter reloaded two handguns with ammunition from his backpack during the killings, Downing said. Harper-Mercer was “firing on people who were just lying there,” Downing said.

Downing also said the shooter seemed to lose interest when a woman told him she couldn’t move her legs to stand up because of the pain.

Downing was lucky. He will never be the same. What he witnessed last week will always be in his brain and his life has changed forever. Lucky him.

Common sense tells us that things just can’t keep going the way they are. Millions of Americans are on the side of passing stronger gun laws to stop at least some of the massacres. Why would we not? We know the answer. The corporate gun lobby, representing mostly the gun industry and not their members, has a frightening hold on the country’s conversation about guns and on our political process:

In more than three decades of service to the NRA, Wayne LaPierre has done more than any other man alive to make America safe for crazed gunmen to build warlike arsenals and unleash terror on innocents at movie theaters and elementary schools. In the 1980s, he helped craft legislation to roll back gun control passed in the wake of the Kennedy and King assassinations. And since the late 1990s, twice he has destroyed political deals that might have made it hugely difficult for accused killers like Holmes and Lanza to get their hands on their weapons.

A predecessor once characterized the NRA as being “one of the world’s great religions,” and 64-year-old LaPierre is a strange fit to be its pope. LaPierre did not come from gun culture. He wasn’t a hunter, a marksman, a military man or a Second Amendment activist. “He’s not a true believer,” says NRA biographer Osha Gray Davidson. “He’s the first NRA chief you can say that about.”

But judging from the commentaries, comments, news coverage and finally, some courage by some of our politicians, things are changing. We are not letting candidates for the highest office in the land get away with saying, ” ‘Hey guys, everybody attack him. He may shoot me, but he can’t get us all,’” Seriously? There are more where this came from in this Salon article.

Picture yourself in the room with the Oregon shooter. Someone ( an Army veteran) did actually try to rush the shooter but he was shot and disabled by the shooter. But never mind that. Dr. Ben Carson is sure he would have done it differently and the outcome would have been different as a result.

Picture a room full of first graders. And one of them, Sarah, says to Jack- “Hey everybody, we can take this guy down. Everybody attack him.”

People like Dr. Ben Carson are in an increasingly small minority. The NRA, for example, represents ( or they say they are representing) about 4 million gun owners- give or take a million. A small percentage of Americans own guns.  Even fewer of these are actually members of the NRA. And for those folks, we are letting our kids and others be slaughtered?

In a recent post I wrote about the anger over the string of shootings- one following on the heels of another. We are turning that anger into action. Please join one of the many organizations working to prevent gun violence and let your voice be heard.

Where is common sense? We are better than this.

Speaking of millions in favor of stronger gun laws and expanding Brady background checks, I ran across 2 articles in the Washington Post written by gun owners who want change. The headline on the first one is” “I’m a gun owner. The NRA doesn’t speak for me.”  The second article, also in the Washington Post, has this headline: ” Most gun owners support background checks and other limits. So why aren’t their voices heard?”

We know the answer to the question asked in the second article. And we also know that the first article’s writer is saying what many reasonable gun owners are saying. The NRA does not speak for them. So when our elected leaders wrap their heads around this idea, something will change and lives will be saved. Until then- calling all gun owners. Join with us in our efforts to make change happen. We need your voices.

Since I mentioned the anti-government gun extremists who showed up to protest President Obama’s visit to Roseburg, Oregon, I feel the need to let my readers know that the man who organized the protest rally is a convicted felon.  Hmmmmm.