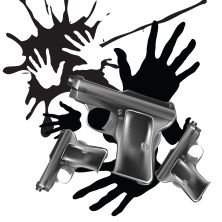 The Minneapolis Star Tribune wrote an editorial that appeared in today’s version of the paper. The editorial focused on the latest round of shootings in downtown Minneapolis that left 9 people injured and one dead last week-end. I wrote about this in a previous post. From the editorial piece:

That’s a different kind of crime-fighting challenge, city officials said during a City Council Public Safety Committee this week. And, as one pointed out, combating it involves a strong focus on gun access — using current laws to prevent violent criminals from getting guns, prosecuting them to the maximum when they possess and use guns, and expanding efforts to take more firearms out of circulation.

Hennepin County Attorney Mike Freeman and downtown police Inspector Mike Kjos said they are looking at additional traffic-flow and business-hour changes, understanding that those strategies only go so far. Therefore, doubling down on access to firearms can make a difference. It’s far too easy for those who intend to inflict harm to get guns. And once caught and convicted on gun charges, too many of them are back on the streets too soon. As Freeman noted, his office, the various law enforcement agencies and downtown stakeholders must continue to work together to bring brazen offenders to justice.

It doesn’t have to be this way. There is an answer staring us in the face but our leaders are ignoring it. It’s clear that easy access to guns in our communities is causing senseless shootings and deaths and injuries. There really is no argument about it. Preventing easy access to guns has to be a solution. In an interesting article that came to may attention, Chicago criminals serving time were asked where they got their crime guns. From the article:

A survey of inmates in Chicago suggests most criminals don’t steal guns. Instead they get them from family or people they know.

“There are a number of myths about how criminals get their guns, such as most of them are stolen or come from dirty dealers. We didn’t find that to be the case,” says Philip J. Cook, a professor of public policy, economics and sociology at Duke University’s Sanford School of Public Policy.

What the study found is that at least these criminals got their guns from their friends. (Where did their friends get their guns?) They didn’t try to buy them from a gun dealer. Why? They would likely not pass a background check and would be turned away. They didn’t steal them, though many crime guns do come from thefts of guns of law abiding gun owners. Though some of the guns come from straw purchases, many of the guns in the Chicago area came from out of state from someone who was able to get guns and bring them in to sell on the street. More from this article:

“This research demonstrates that current federal and local regulations are having a big effect on the availability of guns to criminals in Chicago,” he adds. “They can’t buy their guns from stores, the way most people do, and are instead largely constrained to making private deals with acquaintances, who may or may not be willing and able to provide what they want.

“Other studies we have done have found that in many cases criminals go without guns because they don’t know how to get one. We conclude that current enforcement is somewhat effective, and devoting more resources to enforcement would further constrain gun access by dangerous people.”

There’s a theme here. When there is easy access to guns for those who shouldn’t have them, shootings will likely happen. Crime will happen. People will die. Our streets will be less safe.

And laws matter. Just as laws matter for speeding, access to tobacco products, drunk driving and other public health and safety matters, gun laws do matter. But we need to expand the laws we have to include requiring background checks on ALL gun sales. Why wouldn’t we? Speeding laws include everyone. No one is immune. Everyone is required to wear a seatbelt. Access to tobacco products includes everyone. No one is excluded. Safety laws for baby cribs don’t exclude certain companies. Everyone has to go through the TSA screening before boarding a plane. No one is excluded. There is not a separate line for some people. All medicine containers now have safety caps that make it hard for kids to open. Even adults have problems opening these bottles.  Not one is exempt. All are included. If people or companies don’t follow the laws, there are penalties and responsibilities for breaking them.

And sometimes the end result of not following the laws is senseless deaths and injuries. That is why we, as a country, do as much as we can to prevent that from happening. But gun laws are the exception. It’s simply not true that criminals just don’t follow gun laws as a rationale for not bothering to pass any. That is a flawed and false argument.

It’s way past time to address the problem of easy access to guns. It takes the shooting of 10 people in one night in downtown Minneapolis for the public’s and law enforcement’s attention to focus on the problem of guns. There are other things that contribute to the problem. But the guns must be addressed. It’s the only common sense argument.

We can do much better than this if we focus on the real problem and not let the gun lobby distract us or scare us into thinking that guns are not the problem. They certainly are. At the national level we can Finish the Job started when the Brady law was passed and expand background checks to all sales. We can, if we have the will, require reporting of lost and stolen guns. We can strengthen straw purchasing and gun trafficking laws. We can make sure people who are a danger to themselves or others don’t have guns. Some states have passed laws to do just that. (California’s Gun Violence Restraining Order) We can remove guns from domestic abusers. Some states, including Minnesota, have done just that. We can hold bad apple gun dealers accountable. (The Brady Campaign is working on that) Revoking state pre-emption laws that keep cities from passing strong gun laws would help with easy access to guns in, especially, large urban cities. From the linked article from the Law Center to Prevent Gun Violence:

At the urging of the gun lobby, however, most states have explicitly removed authority from local governments to regulate guns and ammunition, thereby creating a dangerous exception to the traditional rule of local authority.

State preemption statutes threaten public safety because they prevent local governments from implementing customized solutions to gun violence in their communities and impede their ability to fill regulatory gaps created by inaction at the state and federal level.  Moreover, by mandating a one-size-fits-all approach to firearms regulation, preemption statutes deprive the public of a critical problem-solving resource:  local innovation.

The gun lobby has managed to stop local communities from exercising local control- something they like for anything else ( as mostly conservatives). But when it comes to guns, not so much.

We can, as the article about where criminals get their guns, make sure young people in affected communities of color have more to do than wander our streets with guns.

In other words, we can do this. It is beyond unreasonable and ludicrous that we haven’t already tried to stop at least some of the 33,000 gun deaths a year in America.

New York Governor Andrew Cuomo made a statement after one of his staffers died from gunshot injuries sustained in a random shooting on the streets of New York:

Cuomo called on federal elected officials to summon the “guts and courage” to pass strict laws on the national level because of the guns that have flooded into New York from other states.

“The federal officials in my opinion are afraid of the political downside,” he said.

And he acknowledged he took a hit in popularity for the SAFE Act, passed in the wake of an elementary school shooting in Connecticut. The measure has angered gun-rights supporters and Republicans, especially upstate, and Cuomo’s popularity there has struggled to rebound.

“I paid the price. When I passed the law in New York, the people who were against any gun control got very, very angry at me and the don’t like me and they don’t vote for me,” Cuomo said. “I understand that. But, I was elected to do the right thing. The right thing is this nation needs a federal gun control policy.”

Thank you to Governor Cuomo for doing and saying the right thing. He does have the political courage to do the right thing in the face of strong resistance. That is what it will take in order to save lives. He gets it. Too many of our elected leaders don’t or won’t.

Shame on them all.

Strong laws, community responses to this concerning epidemic, public education and awareness about the risks of guns, enforcing the laws already on the books( which doesn’t preclude passing new ones), holding gun owners responsible for their own behavior, and many other measures, can make a difference. They have already made a difference in the states that have taken action and passes strong gun laws. The evidence is already in front of us.

Do we want to make a difference and make change happen? Or do we want to just have the status quo and let the corporate gun lobby be the deciding group in these important decisions? Do we want our elected leaders to listen to the majority of us who are concerned about our national public health and safety epidemic or will we let them get away with publicly announcing their adherence to the gun lobby’s view of the second amendment?

It’s time to do something and stand with the families of the 33,ooo victims of gunshot injuries. Who are we as a country if we fail our children and our communities in such a tragic way? We need to do #WhatEverItTakes.