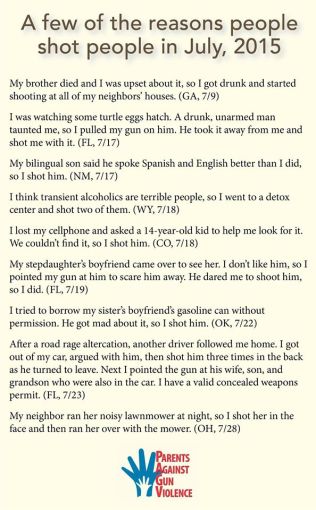 America is awash with guns. So now what? People kill each other over things that shouldn’t result in someone becoming dead. If you don’t believe me look at what Parents Against Gun Violence puts together every month about the reasons people shoot each other. You can get on their Facebook page and click on the incident to see that they are not making this stuff up.

What should we do? For we are clearly not practicing gun safety in America. Obviously banning guns will never happen. How would it happen? Never mind though. That is what the gun extremists tell the world whenever they don’t want a reasonable gun law passed that would only make it harder for people who shouldn’t have guns to get them anyway.

Take this case as a tragic example ( only one of many)- Some Florida teens found a gun in a gun box in a garage. They passed it around and pulled the trigger feeling fairly certain that the gun was unloaded ( how would teens know this?). There was one round in the chamber after all and now a young boy is senselessly dead.

Why does this happen so often? It is happening often by the way. From the article:

BSO, coincidentally, has been planning to have a firearms safety class next Tuesday in Cooper City. The class will focus on safety lessons for children ages 11 to 14. It will discuss topics like properly securing firearms and the dangers of guns.

The Sheriff’s office wants to teach kids about gun safety. What’s wrong with this picture? They want to discuss properly securing firearms with teens? This is the wrong audience for that. Teens are not the gun owners. The adults own the guns. Teens can’t buy guns. Why aren’t the adults required to attend a mandatory class when they buy a gun to teach them that what they just bought is a dangerous product designed to kill another human being? What is wrong with us?

Meanwhile a “responsible” gun owner shot and injured his own daughter. Seriously. In what other country do parents “accidentally” shoot their own kids? Didn’t they have Gun Safety 101? Likely not. Actually very few people get proper training to shoot those deadly weapons they buy for self defense. How then, one wonders, will they know what to do if they actually need that gun to protect themselves or their family?  Because six states have passed laws that don’t even require a gun permit holder to touch a gun before carrying one around in public let alone any kind of training. Other states require permits but no training. Insane. But I digress. From the article:

The dad was trying to show his daughter how to draw a gun when the firearm went off, police said, according to NBC Miami.

You really can’t make this stuff up. Why would you show your daughter how to draw a gun? In what scenario should a young girl be expected to draw a gun on someone? In what safety course did this man learn that having a loaded gun while “playing” with it or showing it to someone else is a good idea?

My friend at New Trajectory blog has written a new post about people getting shot at gun stores. As I said, you can’t make this stuff up.

Meanwhile, while all of this, and much more more, were happening, the Gun Violence Archive is keeping track of numbers. It’s not a good trend. According to the folks at this site, the following is true:

At the bottom of this post is the graph showing the numbers. Can we say we have a national gun violence epidemic? The answer is quite equivocally YES. Check it out for yourself.

So what to do? The answer is not complicated. It’s pretty simple actually if we all use a little common sense and put our heads together to do what’s right for public health and safety. Requiring Brady background checks on all gun sales is the most important thing we can do. Fix the NICS so that all the crucial records of prohibited purchasers are in the system. Fix the system so that there is no “default proceed” for selling guns until a background check is completed. Stopping domestic abusers from getting guns. Requiring people to report lost or stolen guns is another. Strengthening gun trafficking laws is important as is passing stronger straw purchasing laws. The gun lobby loves to say we need to enforce the laws on the books. OK. How about this problem? Some judges are granting felons their gun rights back even when they shouldn’t. Is that a good idea? ASK if there are unsecured guns in the homes where your children/grandchildren play. Lock up your guns if you have them to reduce the chance that someone ( a child, teen, burglar, vulnerable, dangerously mental ill person, person with anger issues) isn’t able to get a gun anyway. Gun suicides take more lives than homicides.

So how about mandatory training and maybe even requiring insurance for owners of deadly weapons? Would that be so inconvenient? Because buying a gun is way too easy. Here’s what’s required now:

To buy one, I would need to fill out a 4473 — a six-page form from the Bureau of Alcohol, Tobacco, Firearms and Explosives.

I’d have to write my name and address. My Social Security Number is optional. And there’s half a page of “yes or no” questions.

“Have you ever been convicted in any court of a felony, or any other crime, for which the judge could have imprisoned you for more than one year, even if you received a shorter sentence including probation?”

“Are you an unlawful user of, or addicted to, marijuana or any depressant, stimulant, narcotic drug, or any other controlled substance?”

Arthur has to write down the type of gun — the make and model and the serial number. Then, he calls the FBI’s Criminal Justice Information Services Division, in Clarksburg, W.V., and he gives them only the most basic information: name, address, driver’s license number.

Quick and easy and out the door you go with your gun.  It should be hard to buy a gun.

But the corporate gun lobby has a hissy fit whenever any of these solutions are suggested. God forbid that we actually do something about the devastation of gun violence. Because what will happen to profits if people decide that guns are a danger to themselves or their families? What happens if training is required as it is to drive a car and more time and effort has to be expended to get a gun? What happens if people must have a background check no matter where they buy a gun?

Until we can speak the truth about our American gun culture, even the pandering bought and paid for politicians will do insane things to get themselves elected. The most recent is Texas Senator Ted Cruz’s claim that Texans ( I’m sure all of them) make their bacon on the barrel of a machine gun. Watch this. Hmmm. The gun lobby gets angry with gun violence prevention advocates for not using the correct terminology. Doesn’t Senator Cruz know the difference between an automatic machine gun and a semi-automatic AR-15? Guess not. He was making his bacon on a semi-automatic. So if he gets that wrong, what else will he get wrong?

But why make a video like this in the first place when you are running for office? Is it cute? Is it showing respect for guns? Is it safe? Is it necessary to get elected to act like a clown to get into the good graces of the gun extremists?

This is why America needs a major tutorial about the role of guns and gun violence in our country. What our politicians should be doing is figuring out how to lower the rate of gun violence in America instead of cavalierly buying votes by showing prowess while making bacon ton he barrel of a gun.

Where is common sense?