Did you get your mother a gun for Mother’s Day? If not you can enter a gun give-away contest at the NRA website to make sure someone special to you has a gun for self defense on this special day. Perhaps someone is lurking outside of the restaurant where you will take your mother for brunch. Or maybe at church? Or at the park where you go for a picnic? Or maybe a mother in your life needs her gun while shopping? Remember this young mother who lost her life senselessly when her 2 year old sone found a loaded gun in her purse and “accidentally” discharged the gun? She died.

Would your mother really prefer a gun to flowers on Mother’s Day?

This is a wrong headed idea but the corporate gun lobby has no common sense when it comes to profits over safety. Women are more at risk for their lives in homes where there are guns than in homes without guns. Domestic disputes too often turn deadly when a gun is available. As a result, too many children are without their mothers on this day and too many mothers are also without their children as a result of deadly and avoidable gun violence. From the linked article:

Wayne LaPierre, executive vice-president of the National Rifle Association, has argued that firearms are a great equalizer between the sexes. In a speech at the Conservative Political Action Committee last year, he declared, “The one thing a violent rapist deserves to face is a good woman with a gun.” But the empirical reality of firearm ownership reflects anything but equality, particularly when it comes to intimate partner violence. Such fights become much more frequent and lethal when firearms are involved, and the violence is nearly unidirectional, inflicted by males upon females. This relationship holds true not only across the United States, but around the world.

The gun lobby needs to promote gun ownership among women, and even children, because fewer homes report owning guns and gun ownership is mostly among older white males living in rural America. But I digress.

Mother’s Day has become a profit maker for greeting card companies, florists, retailers and others. But the annual commemoration is not about that:

The earliest iterations of Mother’s Day in the U.S. were organized for several reasons, but celebrating mothers wasn’t among them. U.S. women’s groups in the late 1800s came together in West Virginia to tackle everything from infant mortality to disease and milk contamination. In 1870, a composer by the name of Julia Ward Howe issued a “Mother’s Day Proclamation,” urging women to become politically active and to promote peace following the U.S. Civil War, according toNational Geographic.

And that is what mothers have been doing ever since- promoting peace, promoting safety for children, promoting public health and safety. Women are politically active but their voices are too often drowned out by a power structure that has not included women in leadership roles where they can make a difference. That is changing but not enough. Women in politics will be key to getting policy changes in the best interest of women, children and families.

15 years ago on Mother’s Day of 2000, which fell on May 14th that year, 750,000 mothers and others marched for sanity and common sense concerning gun violence. I was one of those who attended the Million Mom March and came away a changed person. I found my voice. Eight years after my sister was shot and killed in a domestic shooting, I found a way to talk about it and a way to tell my story. I also found that I was not alone. Unforgettable at the March were the many people carrying posters or wearing tee shirts or hats with photos of a 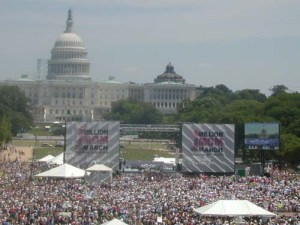 loved one lost to a bullet.

Over the years, as I got involved with the issue of gun violence prevention, I became acquainted with many victims and survivors nation-wide who are my friends to this day. We are in a club that we didn’t want to join. Some of them are moms who have lost children so Mother’s Day is difficult and a sad reminder that our nation is awash in guns and gun violence. It doesn’t have to be this way.

Moms are a force. Don’t mess with a mom who has lost someone to a violent and sudden death. 15 years after the first march against gun violence mothers are still marching. Yesterday hundreds marched across the Brooklyn Bridge, including many gun violence prevention groups, to show support for common sense. There were marchers from the Million Mom March and Brady Campaign chapters, New Yorkers Against Gun Violence, Moms Demand Action and others in a show of unity to demand that our elected leaders stand up for the victims and survivors instead of the gun lobby.

My sister experienced the tragic loss of a young toddler in a drowning death at the lake behind their home. She never really got over the loss of her only daughter, who was a year older than my own. My daughter had a special relationship with my sister because of this loss. And yes, I also know that drownings are the cause of more deaths than shootings in very young children. But with the increase in the number of young children “accidentally” shooting themselves or others, that may change. As more data hopefully becomes available, we will know more about what causes death in young children. Mothers should not lose their children no matter to what cause. My mother, of course, lost her oldest daughter to a domestic shooting.

Today, I know that a gun did not make my sister safer from a domestic shooting. My sister never got to see her oldest son get married or to hold her grandchildren. She wasn’t in attendance at the weddings of my own children but was remembered lovingly at these occasions. I do what I do because of her and because of the many women who have lost their lives to a bullet.

The thing is, my sister is your sister. Just because this hasn’t happened in your family doesn’t mean it won’t. That is why it is so important to be involved in the movement to change the conversation about guns and the role they play in so much devastation to families all over America. Gun deaths and injuries happen in every neighborhood, to any age group, to any economic category, to any gender, to any and all races and usually in unexpected ways. Every one of us can be affected.

So what do we mothers who continue to march want?

We want people to know that if they choose to own guns, they should also choose to understand that those guns are a risk to themselves and others in the home.

We want mothers ( and others) to practice responsible gun ownership. Guns should be locked securely unloaded and separate from ammunition.

We want mothers ( and fathers) to ASK if there are guns in the homes where their children play and hang out.

We want mothers ( and others) to continue to advocate for background checks for all gun sales. In states where that has happened, women (and others) are safer from shootings.

We want domestic abusers to have fewer guns, not more guns. Some states , including my own state of Minnesota, have passed laws to make sure the guns of domestic abusers are required to be removed from them before they are used to kill a domestic partner.

We want mothers and women to run for political office and raise the issue of gun safety reform and then get the job done to make our communities safer.

We want mothers ( and others) to get involved and stay involved to change the conversation about the role of guns and gun violence. We can make safer communities for our families if we continue to march and continue to advocate for common sense.

We want mothers ( and others) to be loud and clear with elected leaders that the majority of Americans want stronger gun laws, not looser laws.